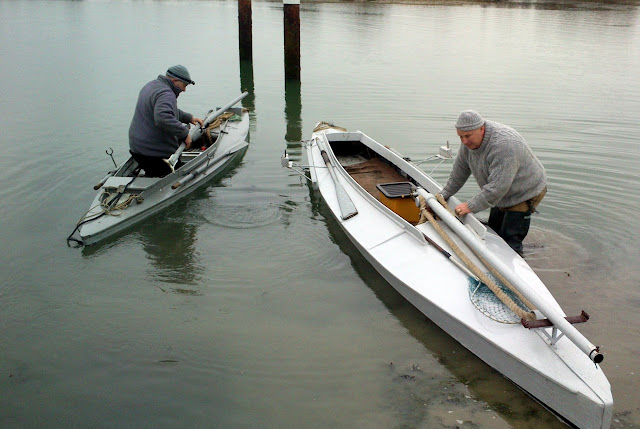 Getting the gig in the water today I met some waterfowlers coming back from an expedition in their gun punts. I've long been fascinated by these legendary boats but never seen any in full working trim. 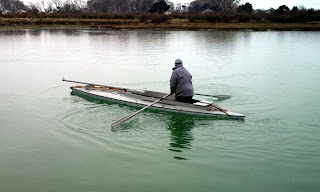 The first thing I noticed that has been absent from the museum displays at Stalham and Havant is the thick 'breeching rope' running from a shackle at the bow to either side of the gun's breech. The rope absorbs the energy of the recoil, so the boat does not leap backwards like a startled porpoise but just drifts back by a couple of feet.
The gun is held on a shotgun licence, which shows a reassuring amount of common sense on the part of the police. After all, a gun longer than most naval cannon these days is not going to be an easy weapon to use in a bank robbery. 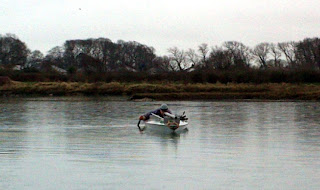 The gun is loaded with a charge of shot (not scrap metal), wadding and a bag of black powder. It is fired by a percussion cap tapped by a lock just like an old musket.
The guy on the left kindly got in his punt and sculled off to the other side of the marina to demonstrate how they approach their target, lying down in the boat using a paddle. The small frontal area and matt grey colour scheme make the boat virtually invisible to the unsuspecting duck.
But actually shooting birds is only secondary. They want to keep the sport going especially in Chichester Harbour where, they maintain, punt gunning was first invented back in Victorian times. And good luck to them, I say.

Posted by Chris Partridge at 21:17

Very sleet craft. I could well imagine them for more pacifistic pursuits.

fantastic - lets see a bunch of yahoo racers call water on one of these!!

They are indeed used for fun - see http://www.keepturningleft.co.uk/blogs/build-a-duck-punt-the-best-fun-an-old-man-can-have-lying-down/ for starters.

The gun punts in the Broads museum at Stalham are not set up properly for gunning. That said, because the big guns on the Broads tended to be of a fairly small bore they were often swivel guns which pivoted around a swivel pin mounted in a block of wood, an iron bracket, or a really solid gun beam. There are always exceptions but the thick breaching ropes mentioned in the article accompanying the excellent photographs were not used, certainly not by the Breydon or Hickling gunners.

I'm amazed at how gun punting lore varies from one part of the country to another, everyone having their strongly-held views on how it should be done. Variety, spice of life etc...

Growing up in Poole I saw a lot of these punts dotted around the shoreline-most, sadly, neglected. They did for many years have a well cared for local gunning punt in Poole Museum-complete with its mast and sail. Unfortunately it was only 'on loan' and the owner eventually asked for it back-I do not know where this beautifully preserved punt ended up.