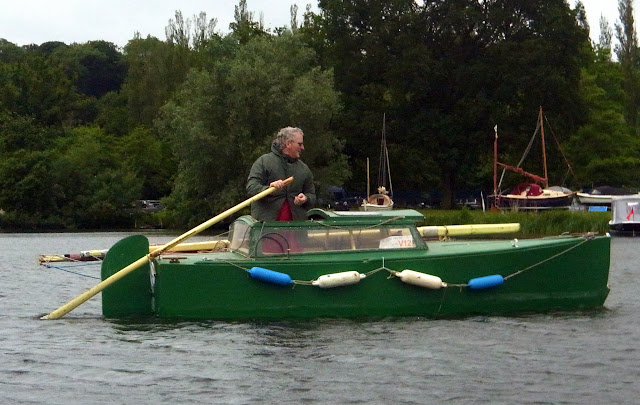 O Docker opened a can of worms with his comment on yesterday's post on scullying, with advice on how to build a sculling oar by sailor and author Jerome FitzGerald. 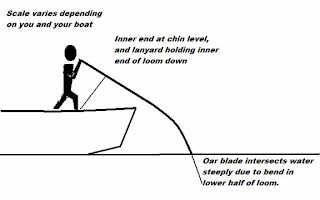 FitzGerald shows a sculling oar bent down at the business end to dip the blade in the water and create a sort of waggly propeller - his drawing is on the left.
Chris Waite, who has a goodish deal of practical experience with the Chinese sculling oar known as a yuloh, writes:
"While I agree absolutely with the idea of sculling to get your small/medium/large sailing boat around in a calm, I disagree utterly with several assertions made in Mr FitzGerald’s article," he writes.
The first problem is the location of the bend in the oar. FitzGerald places it in the shaft, between the pivot and the water. But that won't work very well at all - it should be in the loom, between the pivot and the handle, where it is in all Chinese yulohs. "If you put the bend in the blade outboard of the pivot/notch, then much more of the swing on the handle simply goes into rotating the blade, rather than moving it through the water – like using any winding type handle, but backwards. The reason for the bend is to induce alternate angles of attack as the blade swings to and fro and it is actually just a crank – as demonstrated in the ‘Scullmatix’," Chris says. 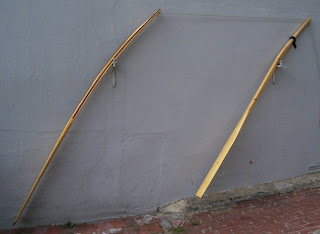 The first yuloh Chris made, on the left in the picture, had a lovely bend along the entire length of the shaft/loom. It waggled impressively in use, but didn't provide as much forward momentum as anticipated.
His current design (on the right) is a bit less elegant but much more effective. As you can see, all the bend is inboard of the pivot.
The second problem is the angle of the blade in the water, which Fitzgerald says should be as steep as possible, like a propeller, at an angle of at least sixty degrees. "Regarding that sixty degrees, I have tried increasing the depth of the blade and the result is that the boat starts to slow down much after forty-five degrees. I have not worked out the reason yet, but it does," Chris says. "Orientals have been doing this much, much longer than either Jerome FitzGerald or myself and they always have the bend inboard and the blade at a shallow angle."
I personally suspect that the reason a steeply-angled sculling blade does not work very well is that at the ends of the stroke the blade comes to a halt as it changes direction. At that moment, it is actually acting as a brake, slowing the boat down. An oar at a shallow angle will exert much less drag at the ends of the stroke.
In the picture above you can see how Alistair Law sculls his Paradox Little Jim. He did serious mileage in his heavy boat on the HBBR Thames raids using the sculling oar - note the bend in the loom of the oar and the shallow angle of attack.
Posted by Chris Partridge at 21:06

Sorry for stirring things up - one of the few things I appear to be any good at.

I remembered the Pardeys' chapters on sculling and a quick Google turned up the reference to Fitzgerald's article, which shows the short 'lanyard' they discussed. It also has a nice explanation of why sculling works, something I could never grasp from the Pardeys' writing.

Fitzgerald seems to say the lighter loads in a small boat make a yuloh rig unnecessary, but I was wondering if anyone had ever tried it.

And I don't recall the Pardeys mentioning any designed-in bend in their oar at all.

As Chris indicates I have had some experience with the yuloh - actually because I wanted to see where I was going when rowing and a pedalled yuloh does the job. I don't know how to insert one of your clever links here, but maybe he will do it, so that you can see what I am talking about.

The yuloh design with tether, stops the blade diving and induces automatic cocking of the blade as well; infact everything you need except the waggle, at whatever size - seriosly clever.

A few years ago I wanted to build a sculling oar for a Wayfarer. The only source I could find with enough detail was J Fitzgerald's article. I built it just over half scale to finish 8'6" long. Whilst I agree with Chris Waite to some degree about the optimum position of the bend, The Fitzgerald design is far better than a straight oar and produced an efficient means of propulsion which is a pleasure to use.