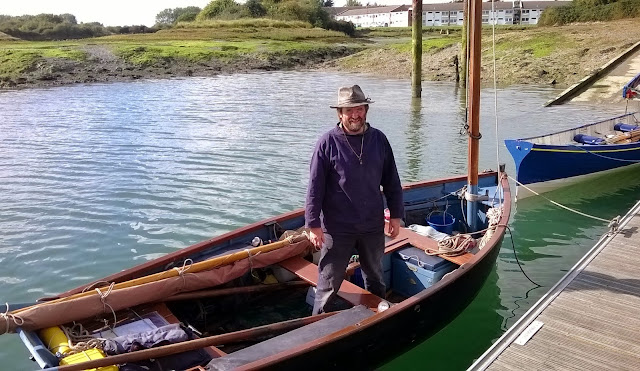 There had been a good deal of discussion of the weather forecast in the week before the Dinghy Cruising Association rally. 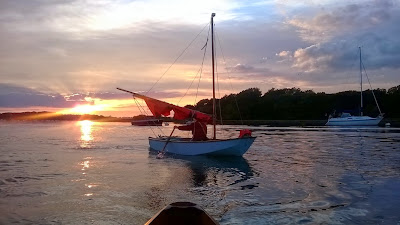 The plan, as far as there is ever a plan for DCA rallies, was to cruise in Chichester Harbour on Saturday, meeting up in the evening for a pint at the Crown and Anchor at Dell Quay, sleeping in their boats overnight. Everyone would have time for another day's cruising on Sunday before pulling out at their various start points.
As it turned out, Saturday was lovely. I had promised to coach a novice crew in a Langstone Cutters pilot gig in the morning, and when we returned to Northney Marina who should be clagging up the slipway pontoon but DCA president Roger Barnes in Avel Dro, an Ilur dinghy designed by Francois Vivier. 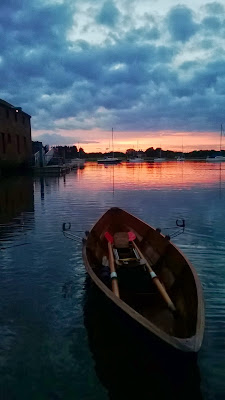 So I had unexpectedly joined the first part of the rally.
Towards evening I put Snarleyow on the roof of the car and drove to Dell Quay. It was a fabulous autumnal evening as I rowed down to Itchenor.
Half way down I spotted a familiar sail so on the way back up I went over. It was Cliff in his Mirror, a bit discouraged by the lack of wind. With a huge sigh he gloomily concluded that he might as well row the rest of the way.
I pushed on ahead and had the boat back on the car by the time Cliff arrived on the pontoon. We repaired to the pub for beer. And who should turn up later but Ian Hylton and his son Will, who had come up from Itchenor in their Wayfarer.
Today, it rained all day as predicted.
The proper sailors had to get back in the wet. As a rower and part-time, drop-in rallyist, I got to stay in my nice warm bed.

Posted by Chris Partridge at 17:08

The benefits of living so close to the water, few weeks ago we had enough time to row down to hamble for breakfast, row back. I was just putting the boat in the garage as the forecast rain arrived right on schedule.