The Birth of the Claydon Skiff 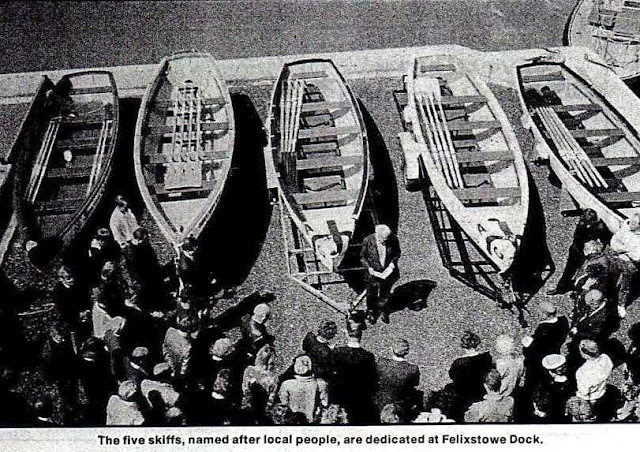 The Claydon skiff came about when people in the maritime industries of Felixstowe and Harwich wanted to row and compete.
Philip Cunningham has kindly sent a clip from a newspaper of the time, sadly with the name cut off but I think it must have been a company newsletter.
The author, Don Black, wrote:

Tugmen of Felixstowe have commissioned, in one gala day, the £3.2m tug Trimley – and a fleet of skiffs to race in their leisure time.
[The tug was remarkable for being crewed by just five men.]
That is the same number needed for each of the five racing skiffs, which this summer will be rasing money for good causes along the coast and estuaries of Essex and Suffolk.
The glass fibre hulls of these 24ft craft come from a mould discovered by chance in a field, then fitted out by tugmen of Alexandra and Felixarc companies at Felixstowe and boatmen and shore staff of Harwich Haven Authority.
Each insured for £3,500, they will be seen racing for RNLI funds from Walton-on-the-Naze to Harwich on June 15 and from Clacton to Walton on July 27.
Their dedication by the Rev. Alan Rawe, from Felixstowe International Seafarers' Centre was followed by naming ceremonies that brought a touch of sadness to an otherwise sunny day.
One commemorates Cliff Marks, among six men in the tug Hawkstone who were all lost in a storm in the Thames estuary.
Another remembers Russel Marsh, only son of Pauline and Brian Marsh, chief engineer of the tug Ganges. Russel lost his fight for life at the young age of seven. The boat bearing his name has been given by his mother.
First to be named was the Alf Saunders, who died shortly after retiring from a lifetime of service on the Thames as a freeman of the river and at Felixstowe as an Alexandra captain.
Representing Felixarc RC is a skiff named Gary John Gray [who] died in a tragic road accident in 1963 at the age of 17.
The fifth skiff belongs to a club formed by boatmen and shore staff of Harwich Haven Authority and is named Vicson, for their chief executive Capt. Victor Sutton.

No indication as to why they were known as Claydon skiffs, but Claydon is a village on the River Gipping near Ipswich.
More on the early days of the Claydons later.
Posted by Chris Partridge at 20:55