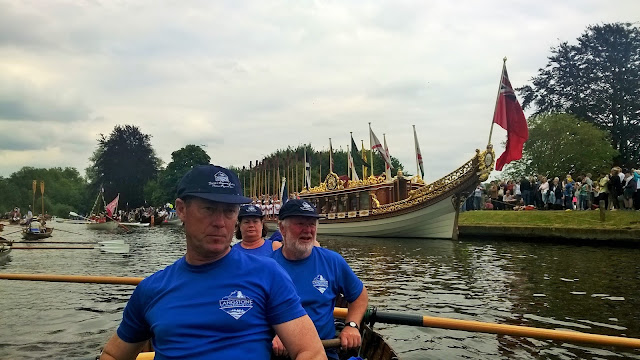 On the Thames again, to row in the flotilla celebrating the 800th anniversary of the signing of the Magna Carta by King John, which introduced the fundamental principle of rowing liberty viz: that "all fish-weirs are in future to be entirely removed from the Thames and the Medway, and throughout the whole of England, except on the sea-coast". This has been the unsung success story of Magna Carta - having rowed down the Thames from Lechlade to Beale and Cookham to Runnymede in the last couple of weeks I can confidently report that not one of the pesky things was in evidence. 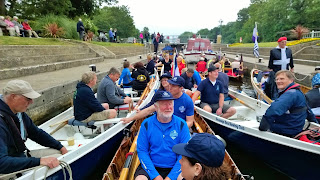 The two day event started with a row down from downstream of Marlow to upstream of Windsor, in several 'escorts' each designed to get through a lock in one hit. The escorts swapped over in a rather complex way so everyone had quite a bit of hanging about. Luckily we got to hang about at the boathouse at Cliveden, one of England's grandest country houses and the location of the famous politicos and tarts scandal starring Christine Keeler and Mandy Rice-Davis. We hoofed up the hill and wandered round the spectacular terraces. 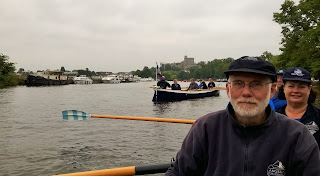 The next day was a mass row down to Runnymede where there was a pageant including jousting and all that sort of stuff.
Langstone Cutters had smart traditional English rowing caps with the wrong wording on (thanks a bunch, embroiderer idiots). Skiff crews came dressed in striped jackets and boaters, while the amazing City Barge lot in their gondolas, sandolos and djhajsas cut a dash in medieval gentlefolk costumes. The picture at the top shows us moving alongside the Queen's Rowbarge Gloriana for the final salute.

What a great crew we had in Les, Marion, Steve, Sue, Marilyn and Jenny.
And there was TEA. 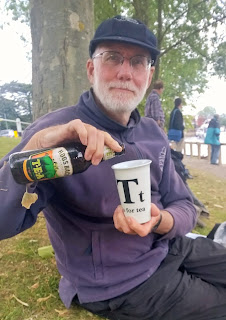 Posted by Chris Partridge at 18:21

I would have thought the organizers would have provided some runny mead!