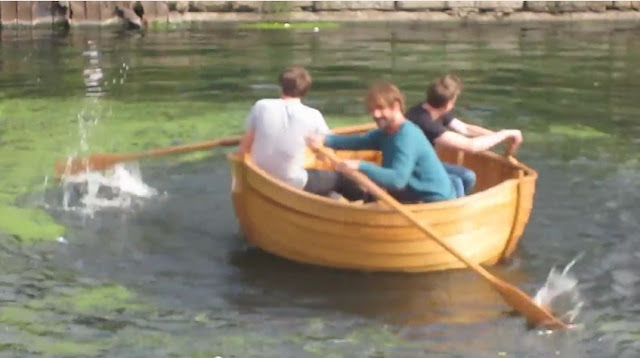 These are artists (OF COURSE). JocJonJosch is an Anglo-Swiss-Slovakian collective that commissioned this work from the Boat Building Academy in Lyme Regis a couple of years back. It symbolises many things. Their timing is awful and they need to keep their arms relaxed and straight at the beginning of the stroke and lean back. Then they will row in circles with style.

Back in Victorian times an Edinburgh businessman by the name of John Cox (ha!) promoted a gigantic health park called the Royal Patent Gymnasium, featuring rides combing thrills and exercise. The biggest was the Patent Rotary Boat, also known as the Great Sea Serpent, a vast wheel pivoted horizontally above a pond. Up to 600 rowers sat on seats round the edge and rowed, achieving the speed of a small steamship apparently. You can read all about it here.
These items were contributed by Scottish Coastal Rower supreme Robbie Wightman, who has a deranged sense of humour. Thanks, Robbie!
Posted by Chris Partridge at 19:44