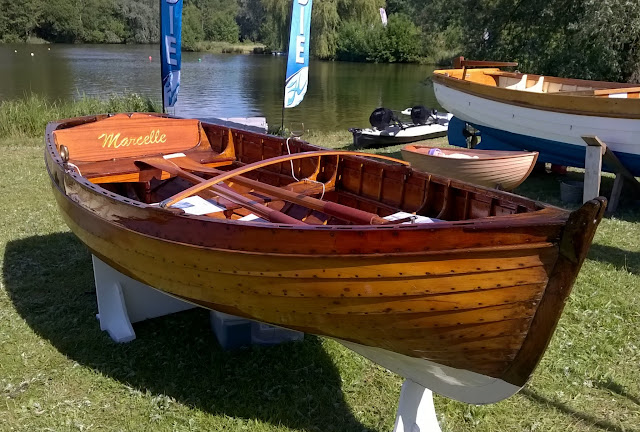 You know that nagging feeling at the back of your mind..."I've seen that boat before..."? Well, I didn't have that feeling at all when I saw Alan Staley's lovely boat Marcelle at Beale Park.
But I featured it in this blog back in 2009 when I saw her at Southampton. Memory's clearly going.
Anyway, this time Alan had included a leaflet with a lot of interesting history. It seems she was built in 1947 by a 14 year old pupil at Canterbury Art School, John Harmon. He took the lines off a boat on Whitstable beach, building her in the family back garden, probably with the assistance of his brother who was an apprentice boatbuilder. She was launched in 1947.
In  the storm of 1953 she was used to rescue people from their flooded homes. John sold Marcelle when he emigrated to Canada in 1955.
Alan says she was just days from being a beach bonfire when he found her and persuaded the owner not to do it. The back board and bottom boards where missing but surprisingly the original oars had survived.
Now look at her. Well worth the effort, I think.
Posted by Chris Partridge at 12:28