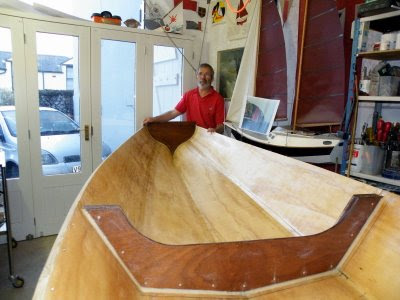 A very interesting rowing boat is taking shape on the banks of the River Arun in Sussex. It is possibly the most boat you can get out of two sheets of plywood, and, unlike some two-sheet boats, is shaping up to be rather lovely. And she splits into two for easy transportation.
Chris Waite's new sculling boat starts as two sheets of 8x4 ply, only 4mm thick but three good, thick plies, not a thick middle of rubbish with thin, weedy layers on the outside like a British Rail egg sandwich. He was 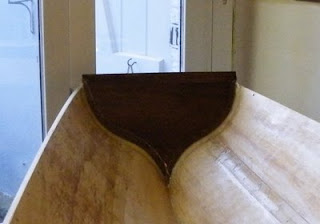 lucky enough to get the stuff at £10 a sheet from B&Q.
The sheets were cut in half lengthwise at an angle, as in the photos here (sorry - if you're not a member already you have to join the uk-hbbr Yahoo! group first). The lines started straight, but were curved afterwards to remove the excessive rocker that would have made it difficult to keep in a straight line. The eight pieces are all identical, which is amazing when you look at the difference between the bow and stern sections.
The differences are largely at the ends. The bow and stern sections are angled differently, but the main difference is that the stern is forced into a wineglass shape over a former cut out of chipboard. The ply was pressed into shape between the two halves of the former. The transom itself is made of mahogany and inserted afterwards. 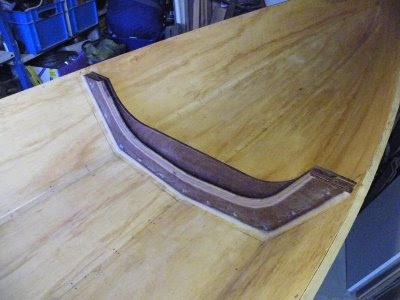 The parts were stitched together and opened up to be tacked with epoxy in the usual way, except that the two ends were kept separate.
Chris then built a pair of middle frames that will slot together to align the two halves for bolting together. They rise high above the waterline so no water should be shipped, although there will be a seal as well.
When the halves were brought together, the line of the sheer was kept by attaching a temporary gunwale along the top (it is a roofing batten split in half). 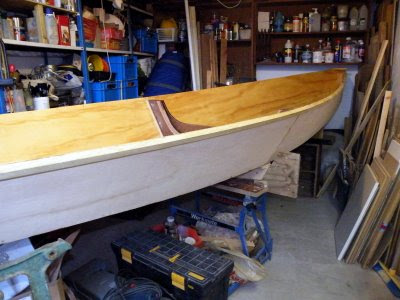 Chris hopes to have the boat finished for the UK Home Built Boat Rally trip down the Thames from Lechlade to the Beale Park boat show in June. See you there!
Posted by Chris Partridge at 20:26

She has nice line already