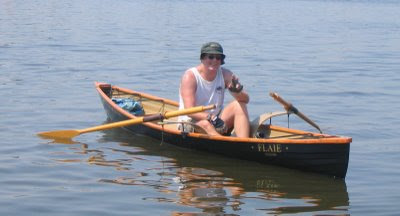 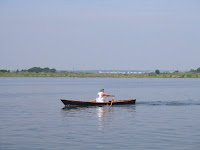 Jake Millar is a guy who builds the boats he likes to use. Here he is, hot, exhausted but happy after a seven mile race on one of the rivers or inlets close to his home in Brick, New Jersey. And here's a picture of him approaching the finishing line with bow wave foaming, and of him cooling

off.
A professional boatbuilder with his own company, Beaver Dam Creek Boat Company, Jake builds the Barnegat Bay Skiff, a highly-regarded boat for open water rowing. He writes:

"Several years ago I saw the molds for the Barnegat Bay Skiff come up for sale in an ad in Messing About In Boats - I saw an opportunity and took the plunge. I bought the molds, one unfinished hull and the rights to build and went into building boats on a very small scale. 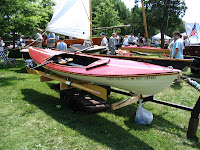 I currently build just a few boats each year and only show at local boat shows and environmental festivals. I get sales through boat show contacts and word of mouth from other Barnegat Bay Skiff owners.
I've been rowing my own Barnegat Light Skiff (the open version) now for about 5-6 years and have been having a blast out in our area creeks, rivers, and bay. I've even had her up to the Catskill Mountains lakes and down to Chesapeake Bay creeks. 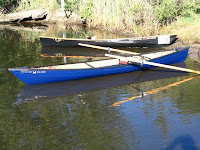 The Barnegat Bay Skiff is 15ft 2in long and 32in beam. The fibreglass hull is hand laid up and finished either with lots of lovely mahogany and stainless steel or low-maintenance polyvinyl and aluminium, according to taste.
The skiff comes in two varieties, the original decked version and a lighter open type. The outriggers made of laminated ply have now been replaced with drop-in sliding seat units by Piantedosi. The light version can also be rowed by two on fixed seats.
Jake can be reached by email here. 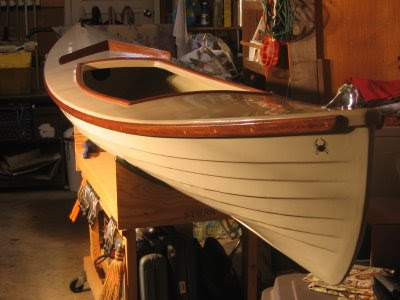 Posted by Chris Partridge at 10:38