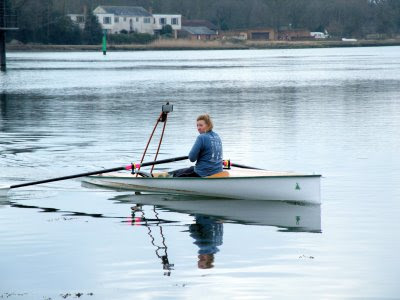 Paul Zink brought the prototype Clovelly Scull to the Hamble river today to show what it can do. And what it can do is impressive: it is fast, stable and reassuringly buoyant. An ideal boat for offshore rowing, in fact, though the conditions were not challenging as you can see from the pictures. Glassy smooth, in fact.
The wide, mussel-shell shape and tall vertical stem combine to create a hull of real character. The broad beam creates a lot of initial stability, so there is none of that uneasy wobbly feeling you get in a racing shell, but the double ended shape creates very little wake and she is easy to push along at five or six knots. 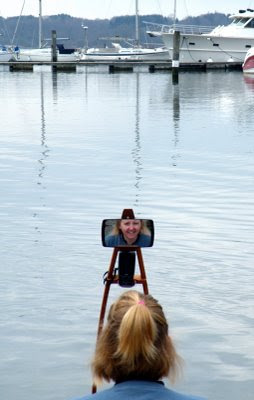 But the feature that intrigues all scullers is the sliding rigger. The seat is fixed and the rigger slides in channels at the bottom of the boat, so instead of sliding your whole body up and down, you simply move your feet.
This has several big advantages, the main one being that your weight stays at the centre of gravity of the boat and the pitching movement of sliding seat boats is eliminated. I can watch the stern of my Sprite shifting up and down markedly as I row, but the Clovelly Scull's canoe stern moves hardly at all.
The rigger itself is very high tech, a carbon fibre wing that is stiff and light. The rigger can be easily removed and carried in the boot of the car, making the boat considerably lighter and much handier for lifting onto the roof rack.
Another novel feature of the boat is a bipod mast for a front-view mirror and a GPS. I have always been a bit sceptical about mirrors. People recommend them all the time, but until today I had never seen anybody actually using one.
The mirror on the Clovelly Scull is slightly concave to give a wider field of view, and the mast positions in right in your line of sight. It is strangely addictive - at one point I suddenly realised that for the last few minutes I had been looking in the mirror all the time, not just giving it an occasional glance. It is really useful for spotting upcoming posts that would otherwise pose a signficant on-your-back-with-legs-waving-in-the-air risk, but it is difficult to judge distances so you still need to look round.
It is also dead interesting to watch the speed on the GPS, even if it is just telling you how idle you have been.
The hull creaked slightly as power was applied, possibly due to flexing of the GRP hull against the GRP deck. Not a problem really. The boat has a skeg that can be retracted by pulling a cord. It did not seem to make all that much difference to tracking but it might be more effective in choppier seas.
Ruth Wake of Langstone Cutters, an experienced sculler, took the boat out and came back enthusing about its speed and stability ("I nearly caught a crab and was surprised how easy it was to recover" she said) and muttering something about wanting a pink version. 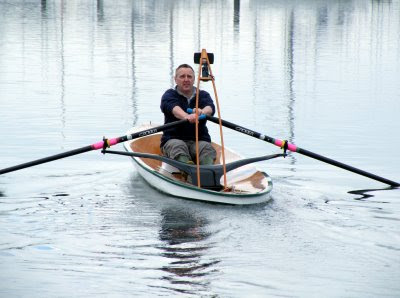 Max Taylor, who has only rowed fixed seat boats, also took it out and took to it like a natural. He also came back with glowing reports.
The first boats are under construction at Rossiter Yachts in Christchurch, who make most of the boats that are being rowed across various oceans right now and also produce a coastal four. Prices have yet to be fixed.
Posted by Chris Partridge at 17:05