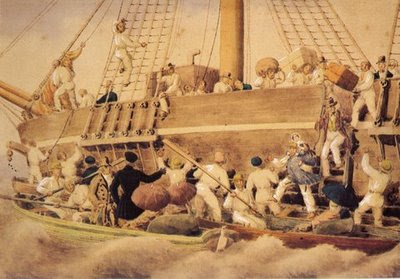 When they arrived at Funchal, Madeira in 1853, Isabella de Franca and her husband had to land by boat. They were swung from the ship to the boat in a chair, which Isabella found alarming but exciting:

"I was very much scared at being hoisted out of the ship, to hang over the sea, and then be swung back again and dropped into the boat; but when the Captain had packed me up safe, wrapping a Union Jack round my legs and fee, I shut my eyes and before I was aware of having moved, felt a hand and heard a voice in the boat, into which I had thus rapidly and silently descended. In a minute were were both comfortably seated, with our friend and a Custom House Officer in charge of our luggage; and a beautiful row we had..."

Her watercolour doesn't show the chair: presumably it was used only to load the outermost of the wherries which are moored three abreast against the ship. One lady is being carried on the shoulders of a beefy sailor, stepping from boat to boat with casual confidence, despite the nasty chop that is sending waves almost to the gunwales of the boats.
Dangling in a chair over the ocean, even when draped in a Union Jack, is not exactly a stylish arrival but much more memorable than staggering into the airport terminal from the EasyJet plane.
Posted by Chris Partridge at 08:39