Midhurst is hidden in the South Downs, miles from the coast, but it has two splendid stained glass windows with marine themes.
This one shows Christ calming the waters. He stands in the stern of the boat, with St Peter and St Andrew, who is either rowing or steering (in which case he is looking the wrong way).
The ship's rigging makes no sense except as an artistic background for the main figure. Even the ratlines that the Lord is holding on to rise to a point entirely unconnected with the masts. But it is a striking image.
Another window, in memory of Lt Cmdr Henry Biggs Warren RN, has as its background a twilit harbour, the final haven that Cmdr Warren has reached, guided by the lighthouse of the Scriptures. Interestingly, every one of the ships is a sailing vessel despite the window having been made after his death in 1926. 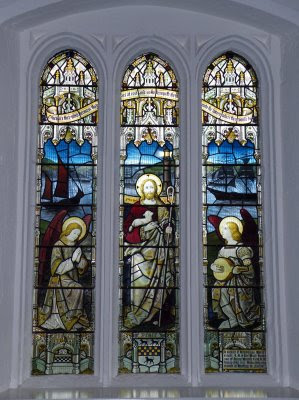 Posted by Chris Partridge at 19:34