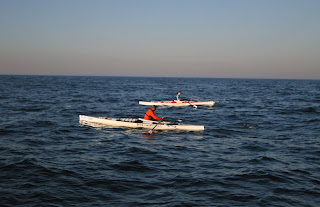 The Canadian Angus Expedition rowing boat that I blogged about last year is finally nearing production and a great video demonstrating its features has been posted at their website here. 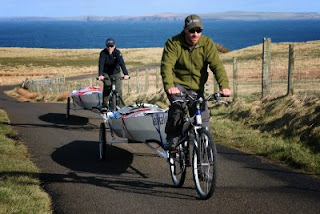 The boats are 18ft long and at 35in much broader in the beam than a racing shell, but that gives them a lot of stability and huge carrying capacity - when Julie and Colin Angus rowed their prototypes from Scotland to Syria they stored not only their camping gear but their bicycles and trailers in the lockers. 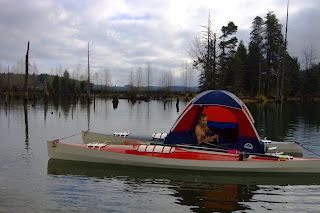 Despite the dimensions and the weight, they crossed the Channel in under five hours when James Cracknell could only manage six hours in a fine boat. Julie puts this down to the stability, meaning they could put on the power instead of concentrating on staying upright. The record is held by Guin Batten at 3hr 14min, done in flat calm conditions.
The shop is open, and boats can be boat in kit form or built from detailed plans. Here in the UK, it is probably uneconomic to ship a kit - it would be much better to buy the plans at $149 (including a comprehensive build manual). I am told that a European distributor is in the offing who may make boats and kits available over here.
Posted by Chris Partridge at 21:11