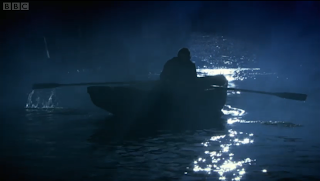 I wasn't going to watch David Dimbleby's Seven Ages of Britain because most of his last series was wasted in endless sequences of the great man lecturing from the wheel of his Land Rover instead of showing us interesting stuff. But I caught the begining of the new series in the course of looking for something else and bugger me if he wasn't rowing a skiff on London River, dark and foggy. He pushed onto the foreshore, got out and dug into the gravel to reveal...a bit of plastic looking just like a Roman bronze head of Hadrian!
It was all too artful for words. Even the fog must have been generated by special effects. 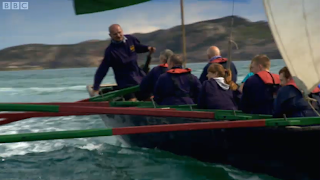 But at least Dimbleby was really rowing, and he took to the oars again later in the programme, in a currach recreating St Cuthbert's voyage from Ireland to Iona.
The currach was built by the Causeway Coast Maritime Heritage Group, and has been rowed not only across the Irish sea but also to festivals in Brittany to meet with skin-on-frame traditional boats there. 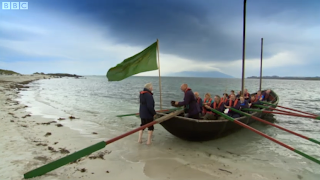 Dimbleby asked the steersman, Ivor Neill, if they were religious or did the voyage for fun. He cheerily replied that even the religious people did it for fun too. Well said, that man. 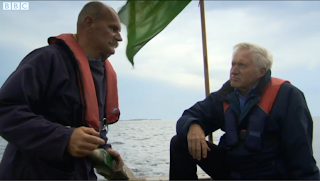 Posted by Chris Partridge at 09:19

There was also a good bit of rowing at the start of last weeks "Empire of the sea" - worth catching on iPlayer if you did get it first time round.

Dimbleby was jolly if lightweight, but that currach was very impressive.

We've been enjoying The Empire of the Sea series rather more.

It has an argument to make - that British history is all tied up with the Royal Navy - but I hadn't realised that Charles I's failure to deal with those pesky Barbary pirates had something to do with bringing him down.

I don't remember anyone mentioning that when I was at school!

Dimbleby is addicted to cliches too: "The Romans changed Britains landscape for ever" etc. And when he asked one of the archeologists who helped dig the Sutton Hoo ship "It was all covered in mud, was it?" I had to have a quick rant. But he did show several things that were new to me, such as the number of representations of Britannia round the Roman Empire.
Yes, Empire of the Seas is an altogether classier act. Very good.