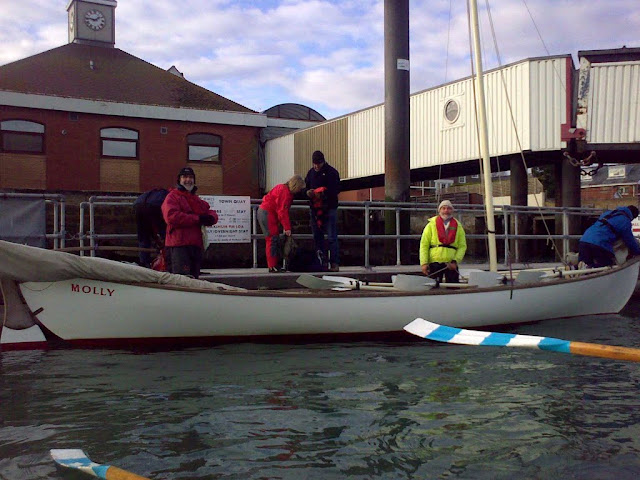 Every New Year Henley Whalers have what they rather cheekily call an Icebreaker row across the Solent, which is never known to freeze. In fact, this year they have had to chop their American Whaleboat Molly out of the ice at her mooring on the Thames but the Solent remains iceberg-free. 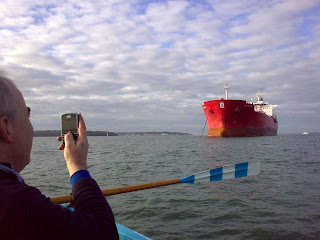 Langstone Cutters joined them in Gladys, our Clayton Skiff. We launched at Lee-on-the-Solent and Molly at Calshot.
We took a lot of photos of this vessel in the hope that our families would be impressed by the perils we ran in one of the world's busiest shipping lanes, but it is so obviously at anchor I don't suppose anyone was fooled.
It was a beautiful day, calm and almost windless, so we had the water pretty much to ourselves. Gladys tied up to the Trinity Landing pontoon and Molly at Town Quay, the crews meeting at the Union Inn where we had a natter over beer and lunch. 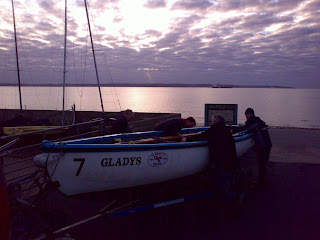 Then back to Lee. A bit of a scare when we found that the tide was so low Gladys could not get to the end of the slipway, but one of the great features of Lee is that there is a slipway every few yards along Marine Parade so we simply moved along to the next one and hauled out without difficulty as the sun began to go down. A fabulous start to the year - many thanks to Molly's owner Geoff Probert and the rest of Molly's crew.
Posted by Chris Partridge at 10:29