An Englishman rowing in Finland 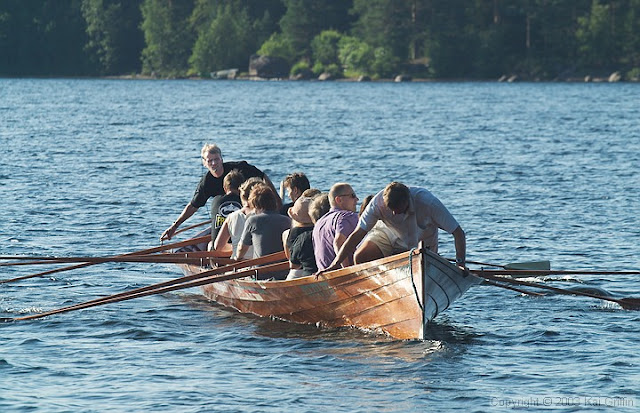 
He has sent this account of the preparations, painting a charming picture of the cameraderie that builds up in a crew, however disparate their ages, professions and nationalities (the picture is from the Flickr stream of kai.e.g).

Rowing in a Finnish church boat has many similarities to joining a cult meeting - one sets out regularly to meet up in a remote location, there one a participates in a highly intense ritual ceremony involving close (almost intimate) contact between members, as well as a number of arcane words and orders that sometimes are even chanted by the 'leader', and after which one returns home feeling in some ways purged, if not elevated to a higher state of being.
No doubt for many rowing has a similar restorative effect and, despite the frequent aches and blisters along the way, it is a highly social sport with many elements of cooperative participation as well as an intense individual focus, if not pain! This hobby in Finland has very social if not spiritual origins, the boats having been used to transport parishioners from distant households and hamlets to the highly community-focused services in local churches. Even more so than in Anglo-Saxon countries, the church was The Establishment: the centre of administration, the prime place for social interaction outside the family nexus, the source of learning and news and of course gossip. Preparation for worship during the outward voyage was apparently solemn, with restrictions even on the clothes as well as language. The homeward leg might be relaxed, even revelrous, with participants singing together and the boats joining in competitions with other local crews.


The crew I have joined this year are a fairly typical cross section of the rowing populous. Of the full compliment of 14 rowers there are a handful of students and a similar number of pensioners, a couple of foreigners, some occasional normally middle-aged 'others', and then a very malleable hard-core of employees of one state-owned company, whose staff association is the owner of the boat. At least that is how I have understood the set up after the 6 weeks of sporadic participation I have shared. The fact is it doesn't matter who owns what, whom I sit next to or how I am dressed. We meet beside the boats at the edge of the very sheltered bay that is part of the Helsinki archipelago, even if this club is actually located just across the border in the neighbouring municipality of Espoo. There is a period of indefinite and slightly querulous chit-chat/deliberation as the assembly is divided between one of the three boats generally available to take out, with one boat normally reserved for a group from Fujitsu. This is the time for a little social exchange with people one has earlier been squeezed beside in the boat or knows from other contact but, for those who are familiar with the highly disciplined and typically efficient world of business or organization in Finland, this is a thoroughly unstructured and even chaotic process. But it is the way that every variegated individual who appears in time on the shore is somehow allocated to a seat and an oar of their own, and regardless of age, strength, sex or whatever, for the period of that outing are 'all in the same boat.'

Compared with the disciplined preparations of a racing eight, this form of crew composition is haphazard if not anarchic. But as a veteran participant in the sport the days of pre-dawn runs and outings in gale-force conditions are a thing of the past. This is a sport that appeals to students and pensioners alike, to all who enjoy being on the water and engaging in a degree of physical exertion, but whose enjoyment of competition is tempered by an appreciation of contemplation. An outing of 60 to 90 minutes involves very close proximity and opportunity for discourse with one's neighbour, but equally the opportunity for observation of the local environment or for introspection. However for the majority of crew on the last two outings the opportunity is for preparation for the Big Competition ahead, the mother of all rowing regattas (possibly even in the world) - the Sulkava World Championships, held every July in this very remote, eastern Finnish, lakeside town.

In the early years of this century this gathering attracted over 10 000 active participants rowing a selection of classes of wooden boat around the 60 kilometre course through the period of a long weekend in July. (It includes the strange Finnish version of a speedy working boat with one oarsman at the rowlocks and the other paddling 'Indian-style' at the stern, alternating positions when needed.) My crew this year will gather there on the Saturday evening to take part in the 'Churchboat Night Row', starting at 18.00 and finishing hopefully five hours later in the penumbra that is near midnight in these northern climes. Rowing in total darkness is quite a challenge to the senses, especially balance, but even if our energies fail and we are delayed we should have enough light to read the course map that will be provided with, and afterwards to find our way back to our campsite for an early morning sauna to loosen up those stressed muscles.

In the somewhat lackadaisical way that this version of the sport is organized in Finland, I still don't know who will be my seating partner for these five sweaty hours next weekend, even though the full complement is listed on the internet sign-up page. We have met once or twice a week for the past two months, sweated somewhat as we paddled around the beautiful islands of eastern Helsinki that make our training ground, heaved the heavy boat trailers in and out of the brackish Baltic water, and waved goodbye as we departed home on our separate routes. By the time of the 'race,' it's sure that I still won't know all their names even if the faces have become familiar during the last two months. And although post Sulkava rowing is bound to be something of an anti-climax, if it actually continues at all during the semi-official 'Scandinavian holiday month' of July, by then I will have bonded with the 14 other punters in my boat, taking one more step towards integration in this distant European land.

Posted by Chris Partridge at 17:27