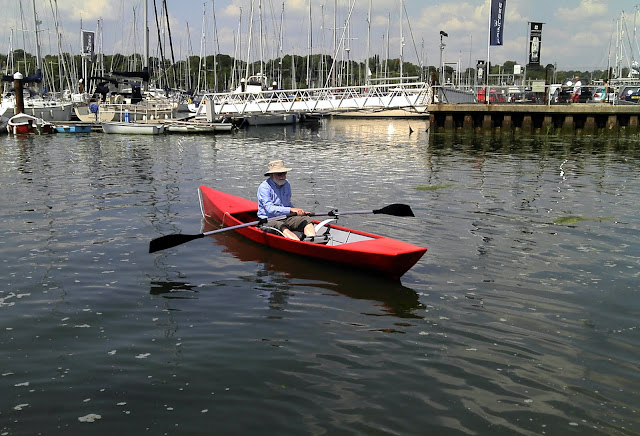 Jeremy Harris's remarkable non-wooden skiff Aero went out under oars for the first time on Sunday, on the River Hamble. Also present were Chris Waite with his remarkable all-wood skiff Octavia and myself, with my remarkable Chippendale Sprite Snarleyow, which is mainly wood but a with bits of SS here and there.

Aero proved to be a bit tippy but with reassuring amounts of secondary buoyancy, and incredibly light. So much so that Jeremy complained that when he hit patches of algae (it's that time of year) the boat would come to a dead halt instantly. This is partly due to the sharp angle of the bow which digs in to the water like an axe.
The outriggers are made of carbon fibre on a foam mould originally intended for a leaf spring in an aircraft undercarriage (Jeremy's other obsession is planes). A pair of John Murray's GA swivels are slid into sockets in the ends. The outriggers seemed very stiff.
The oars are aluminium tubes with carbon fibre blades, not a very happy arrangement but necesary to win the bet to create a boat with no wood at all. Jeremy had weighted the handles to help with the balance but this meant the blades overall were quite heavy compared with my traditional Macons. They were also far too short (also, possibly, the outriggers 'wings' were not long enough).
The short blades meant that Jeremy struggled to push the boat along at the speed she is clearly capable of, but with a few tweeks to the rig, she will fly.
The next step is to install a front-facing rowing device.
Jeremy has built a high-tech version of the cranked oars that used to be used in duck punts, which looks like rowing as designed by rocket scientists. The cranks have a 20 per cent leverage and folding the handles out brings the blades in for convenient stowage. It will be very interesting to see how the design pans out.
Posted by Chris Partridge at 09:27

Thanks for the kind words and photos, Chris.

I'm in the process of deciding on the best length of oar, specifically the bit sticking out side the pin (the front rowing gizmo makes conventional rules of thumb for choosing this difficult).

Were your Macon oars 8ft 6" long? If so, do you think that they were about right?