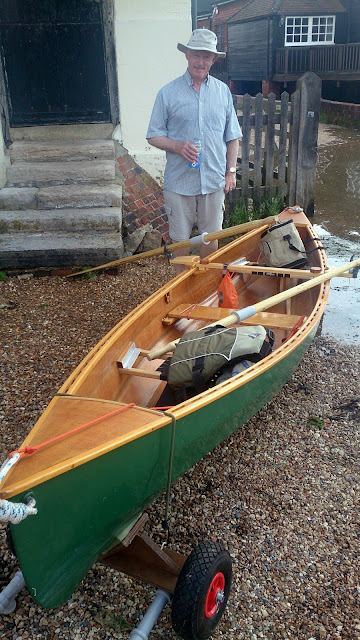 Jim Graham came to a couple of open rowing sessions at Langstone and realised he was going faster under oars than by paddling. So he made an ingenious wing rigger for his home-built canoe and rowed it over from Emsworth.
It is really nicely made, with wooden clamps that connect the wing to the gunwales in just a turn or two.
The canoe is a Paul Fisher design - Christine. 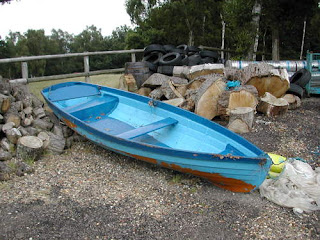 On a separate issue, I was really taken with a boat on eBay that looked as though it could be made into a great camp cruiser.
It is a single Salter skiff in a very dismal condition but seemingly structurally sound. Rip off all that rotten woodwork and strip it back to the bare hull and it would be fine. I imagined installing a floor wide enough to unroll a bedroll, and making the thwart removable. Add a tent, and I would have an ideal boat for the inland waterways.
With a hull in that condition I couldn't see the bidding rising above about twenty quid, which would make it a lovely project.
Was I ever wrong. Bidding is not over yet and it is well north of 200 sovs. Madness.

Difficult decison; 250 quid for a sound GRP hull sounds like a good way to fast track a project ; would be chepper in materials but long on labour to build a hull

I like the outrigger on the canoe, but one question:

The strut between the two sides seems to be pretty much straight across; I can see that feet would go under it quite comfortably, but don't your hands on the oars hit it every time you come to the end of the return for the next stroke?

Otherwise, nobody would bother to make the elegant dipping, curvy things that deliberately avoid this busy area in the oarsman's space.

I didn't get to see him row it unfortunately but he isn't a tall man so he may be able to tuck his legs under.

Yes; legs I can understand, but the bar is right where the oar handles pass on the return to take the next stroke - 'ouch' at every one?

Pity you didn't see him in action