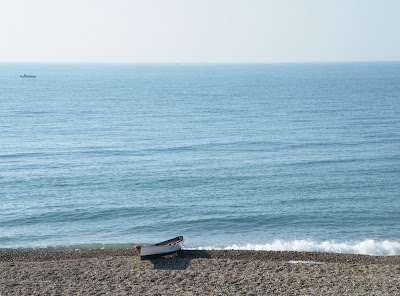 Boating right round islands seems to be an atavistic urge, and I've long wanted to circumnavigate Hayling Island.
Hayling is only a small island, four miles across at the most, set between Chichester and Langstone harbours and facing the English Channel on the south.
It took a while to wind myself up to do it, because the Channel is a big place for a small boat like Snarleyow. And I would have to row and through two harbour entrances with fast-flowing tidal currents.
So I formed a cunning plan, which was to start on the sea front at about two hours before high tide, head for Langstone Harbour mouth and take the tide up to the north of the island. At that point, the tide would turn and I would be wafted down to Chichester Harbour mouth on the ebb. Then back to the start point.
But the weather had to be very calm to risk a launch off the beach, so when Saturday dawned with a lovely clear sky, practically no wind and a nice patch of high pressure promising more of the same all day, plus high tide at 11 o'clock, it was now or never.
Getting in the boat was the first problem. I have never boarded the boat in surf before, even though it was only a foot or so high. The first attempt was a disaster, taking in a good few gallons of water. I had to lift the boat bodily and tip her out. And I got water in my boots, something I really, really hate.
Second time was better and I started off westward. To the east, a huge dredger had rammed itself up the beach and was pumping an arc of water and pebbles onto an area of the beach, an operation I had never witnessed before.

Approaching Langstone Harbour, the bar had a nasty chop on it that Snarleyow simply bobbed over, remarkable boat that she is.

The channel itself was easy peasy and once inside the harbour the wind dropped to nothing and the water became glassy smooth. I got this shot of a cormorant from hundreds of yards away courtesy of my new telephoto.
At the top of the harbour I spotted Steve in his Virus boat, and Langstone Cutters out again. A brief rest stop was accidentally next to some huge blackberry bushes covered in luscious ripe fruit. Just the thing for a little lift as I set off down Emsworth Channel.

Oddly, although I was already rowing against the tide through the bridge that links Hayling to civilization, all the boats in Emsworth seemed to be pointing down channel indicating the tide was still flowing. Possibly the tide was slack and the southerly wind was keeping the boats pointing in the 'wrong' direction.

Chichester Harbour mouth was no problem either, but again the bar to the side of the channel was very choppy and rather alarming, and had just been stirred up by a whacking great motor yacht flying the Royal Yacht Squadron's ensign that had just swanned in looking superior.
I got out just under three hours after I had got in. No drama this time. I just felt completely, utterly knackered. And I had a blister the size of a tuppenny bit on my little finger. Ow.

Posted by Chris Partridge at 09:03