HBBR at the Cotswold Water Park

The Home Built Boat Rally (HBBR) over the weekend was rainy but fun, a pattern that seems to have emerged for these events. 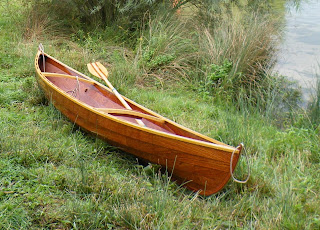 Chris Perkins launched his latest work of art, Stangarra, a little canoe designed by Iain Oughtred. She is well up to Chris's exacting standards, complete with gold leaf name and a stylised stangarra (Scots for stickleback) on the side. For pics of her maiden voyage in the rather apprehensive hands of a middle aged baldy who is more used to rowing, see Chris's Flickr page. His informative and entertaining blog is here.

Noted sailor Brian Pearson discovered sliding-seat rowing in Snarleyow - here he is looking a bit nervous, just like me in Stangarra really. Long thin boats are very much an acquired taste.
John Lockwood's unusual new rowing/outboard tender/utility/fishing boat also got its first wetting at the show. She's almost a catamaran, perhaps a tunnel hull. Anyway, she looks rather ungainly though stable, but goes surprisingly fast under oars. John's oars are rather short for the boat - with a longer pair she could go quite quickly I think. The design was taken from an old copy of Motor Boat and Yachting, John said, adapted for the materials he happened to have around. 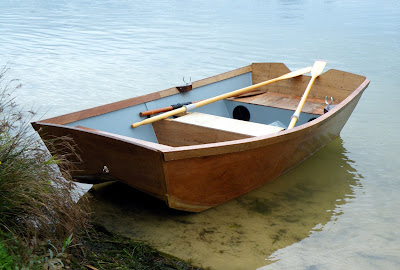 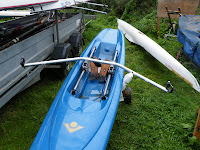 Cotwold Rowing Club are conspicuously racked up in the boat park. Among them was a Virus Yole with sliding riggers, an arrangement I have been wanting to try for a long time.
Unfortunately nobody from the club was around on the Sunday, so I didn't get a chance to go out in it, but the rigger is impressively engineered and shows no sign of rust despite being left outside in all weathers. 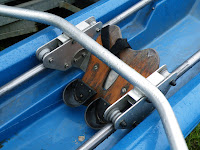 Virus sell the sliding rigger as a bolt-in unit. I'm very tempted by the idea of fitting one in a Selway-Fisher Windrush. At 18ft long and 2ft 9in across, it should go like the clappers while being stable enough for Chichester Harbour and perhaps, with suitable built-in buoyancy, off the beach.
Posted by Chris Partridge at 11:55

Hi Chris,
Thanks for your kind words - however I fear that you will be upsetting some of the residents of North Briton. "Stangarra" is, to the best of my knowledge, is Gaelic not Scots. So much more west coast which is entirely as it should be given where she was conceived and born.
Great to meet up again, long stretch till Barton Turf next year, time for another couple of boats.
Chris P(N)

Damn you, Wikipedia! Although to be fair, Wikipedia says 'Scottish' which is I suppose could cover Gaelic as well as Scots. Deep apologies to all Gaelic speakers.
"Time for a couple of boats" - hark at him. Any chance of building me a Windrush then, Chris?

You only have to ask, I thought there were a few hints being dropped at the weekend. You are going to have to lose that southern subtlety. I am afraid there is a lengthening Q but I can book you a slot after my Rangeley. It will give you time to talk SWMBO into accepting another boat into the stable. What I meant to do on Sunday was try Snarleyow to confirm that rowing is the way to go but I went sailing instead. Too few hours – we need a week long Rally!

Should I just send my unused set of plans for Iain's Snipefish sliding seat rower to Chris for the both of you? Plans include outriggers and sliding seat design. Brian.

Looks like I might be getting a new boat! Thanks for the kind offer, Brian, but I am set on a Windrush now. It's longer (ie faster) and the clinker hull does it for me.