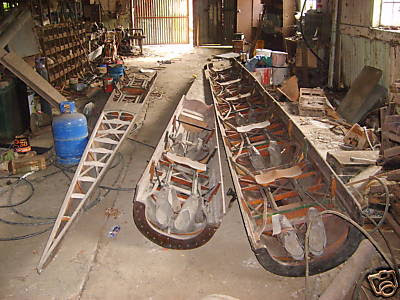 The sad remains of a Sims racing eight has just been sold on eBay. It has no riggers and the hull has been punctured in several places, but it could look good hanging from a clubhouse ceiling, though it would have to be quite a large clubhouse.
The boat is called Piggy Eyre, after WH Eyre, a noted oarsman in the 1880s to 1900s, rowing for Thames RC.
He was a stalwart of the club until his death in 1939, by which time he was very deaf. A story still circulates in the club that at a TRC annual dinner, when the Chairman called for the Loyal Toast the room fell silent except for Piggy's bellowing tones: "...and we rowed like lions, and won by 20 lengths!"
The boat sold for £155.
Posted by Chris Partridge at 21:18