In search of the ideal rowing boat

Committed sailor Brian Pearson of Keyhaven seems to have had something of a road-to-Damascus moment when he tried out my Chippendale Sprite at the HBBR a few weeks back, as pictured above. He writes:

Hi Chris, I will explain. The nice picture you sent of me trying to row your Sprite is currently sitting as the background to my computer screen. My elder son is home this weekend sorting out money to pay for a house he is just buying in France. It's actually on the lake side of Lake Geneva no less. Sounds good yes? So James sees this picture and says that's just what he wants - a recreational sliding seat rower for popping down to Evian and back, not far about 10 minute walk I think. If possible able to carry his fiancé and her little dog as well. My other son also likes rowing at the gym, and he has a girlfriend with a young daughter, so similar requirements when he is staying there. Me, I found it very special when I enjoyed my first go in a sliding seat last weekend. Thus I would love to use it too. So James would like me to sort out a boat which would be kept there for anyone to use. There will be a small boathouse but not sure yet of how long the boat can be to store in it. I am thinking Virus Yole, Merry Wherry II type of boats, that is: single recreational sliding seat rowing with inexperienced water rowers carrying a passenger - guess you have to move the seat/rowing thing to rebalance the boat. Possibly a passenger and a small extra passenger say a small dog or small child? As a sailor I will really value your advice, Brian

I had a bit of a think and replied:

Hi Brian - you lucky chap, having a son with a house on Lake Geneva!
The problem with a lot of sportier boats of the type with sliding seats is that they are long and thin, so passengers are a problem. Not only is the buoyancy a bit low, but passengers feel rather nervous in the tender hull. It's ok for the rower - he's got his hands on the oars and is in control.

The Virus Yole has the facility for a passenger seat. Because the rails the seats slide on extend the entire length of the boat, the rower can move forward simply by using an alternative place for the stretcher (footrest). But there is no backrest on the passenger seat and the cockpit is self-bailing so I suspect the passenger will be uncomfortable and wet.

Take a look at The Rowing Company's Heritage 15, imported from the US. I tried one at Beale and they are good to row, and there are passenger seats fore and aft. I didn't try it with a passenger though.
If passengers are likely to be a frequent occurrence, perhaps a traditional fixed-seat skiff such as Paul Fisher's 15ft Mandarin or Iain Oughtred's Mole would hit the spot.
Francois Vivier does some very nice, mainly fixed seat rowing boats.
Of course, the ideal thing would be to have a Sprite (available as a kit or complete) for an individual workout and a Mandarin or Mole as well, for those 'girl with a parasol' afternoons.
Hope this helps. All best,
Chris

Hi Chris, Thanks for your considered response. In summary then - sliding seat designs best for just the rower. Non sliding seat options are Thames Skiff types. Sliding seats not really used in the slightly wider design needed for a passenger? The other group are the oar and small sail designs we both like. [Iain Oughtred's] Acorn 15, [Paul Gartside's] Bob, and such. I am correct in thinking that the pleasure of sliding seat rowing is the greater pleasure and since the ladies probably will not come along very often, then concentrate on that?

I have just remembered the Appledore Pod which can be rowed single, double and single with a passenger. It even has small sail rig and dagger board as extras. Video here. Although GRP is not your thing, it would suit for James, since he is not going to be there often. This video seems to illustrate it is possible to combine single sliding seat with a passenger. Can you think of any home build design with similar features? Perhaps we could go to Andrew Wolstenholme and spec a clinker ply boat, he does draw the most wonderful shear lines and he already has Sprite and Otter in his design history. Brian

Hi Brian,
I almost bought a 19ft version of the Appledore Pod once - the version you can see here. It was much too heavy and expensive. When negotiations had clearly broken down, the guy I was buying from said, 'would you be interested in this then?' and pointed to a small hull slung under his garage roof. It was the Chippendale Sprite. I bought it on the spot and have been using it relentlessly ever since.
I think it depends on whether your son wants to build it himself or buy off the shelf. The Appledore is a lovely shape and not too expensive, but there doesn't seem to be any passenger seat so presumably they would have to squat on the bottom of the boat. Have you seen the

Chester Yawl? A drop-in sliding seat unit could be easily fitted and it has a nice big wineglass transom providing lots of extra buoyancy at the back if a passenger is sitting on that nice stern seat.
Ted Bird did a version of the Sprite with a seat at the back (below) that he had at Beale a few years back, but he said he installed it because the customer wanted it - he didn't think it would be very practical. So I am sure he would build you a single rower + passenger + dog version of the Otter with pleasure.
All best,
Chris 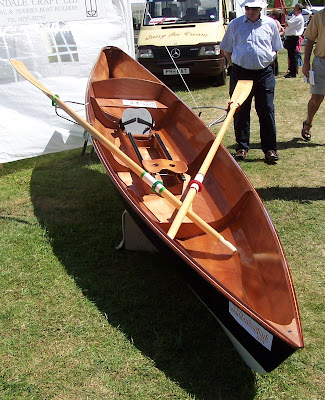 Anyone got any better ideas?

Posted by Chris Partridge at 21:49

You might take a look at some of John Welsford's designs for rowing boats:

scroll down to 'sports rowing boats'.

John designs for openwater rowing, and makes good arguments against sliding seats in his book. (Though Mollyhawk can have that option.)

Can build from plans or part kits are available from Fyne Boat Kits. All the rowing boats apart from Joannsa would be pretty quick to build, and not of them very complicated.

Hi Osbert,
I'm a big fan of John Welsford's designs. Walkabout was top of my 'next boat' list for ages, and the only reason I'm not building one now is that I haven't got the facilities for a complex build from scratch. The kit from Fyne Boats is moulds-only, unfortunately. Could you send me details and pics of your build as it progresses?
Chris

Will send pics in due course.

Not sure I've got the facilities for a complex build either - very cramped garage - but I'm doing my best.

The kit seem to be working out fine so far, though I have not yet got to the stage of cutting the planks.