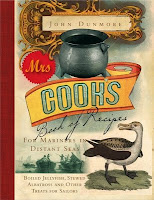 I got a lovely little book for Christmas - Mrs Cook's Book of Recipes for Mariners in Distant Seas, by John Dunmore.
Dunmore imagines Captain Cook's wife Elizabeth collecting recipes and cookery tips from the explorers she met, including Sir Joseph Banks and Captain Vancouver. Needless to say, most are firmly in the 'yuck' category, such as boiled jellyfish and the stewed rat served on Bougainville's expedition to the southern ocean.
Banks recommends that albatross should be parboiled overnight to mitigate the saltiness, and then stewed. Best served with a prune sauce, apparently.
The most inexplicable dish is gruel, which is made by boiling a handful of oatmeal in a pint of water for a few minutes, and then straining. Rather too homeopathic to count as food, I would have thought, but apparently it was made with the sweepings of the storeroom floor when food was running out, and was surprisingly sustaining.
My favourite is Poor Knight's Pudding, basically French toast with sugar and cinnamon. Captain Cook liked it so much he named a group of islands off New Zealand 'Poor Knights Islands'.
Posted by Chris Partridge at 08:30