The Watersports etc Show at Earl's Court had a gratifying number of rowing boats scattered round the small boats area, and apparently the ARA was scouting around looking at recreational boats, which is encouraging if true. 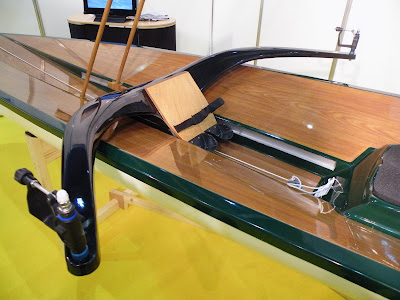 The outstanding exhibit was the Clovelly Scull, as posted earlier. The boat is a dramatic design, long and lean, with a wing-like sliding rigger made of carbon fibre. The deck is imitation wood, which looks surprisingly good. 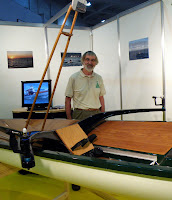 The sliding rigger design looks very simple and effective, with rollers running in U-sections facing each other to retain the rigger reliably. Removing the bipod mast that carries the mirror reveals a slot that enables the rigger to be removed quickly and easily for transport. It looks light but robust.
The skeg can be raised in shallow water by pulling and cleating a rope - again, a simple but effective design. 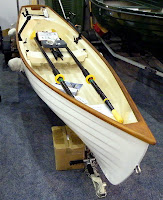 The Heritage Whitehall imported by The Rowing Company was on display on the Heyland Marine stand, and Anglia Yacht Brokerage were showing the Heybridge Roach, a neat little 10ft 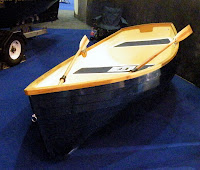 tender selling at the sharpish price of £895 including oars and rowlocks.
For sheer craftsmanship, however, Adrian Donovan was the star with the Whitehall he brings to these occasions.

He is thinking of developing a cheaper version, without the time-consuming details that add so much to the cost. Details like the breasthook, which is made from a specially-selected timber with the grain going round the corner for strength and good looks. A stunning piece of work.

Again, apologies for picture quality - the camera remained set to 'crap' for most of the day.
Posted by Chris Partridge at 15:31