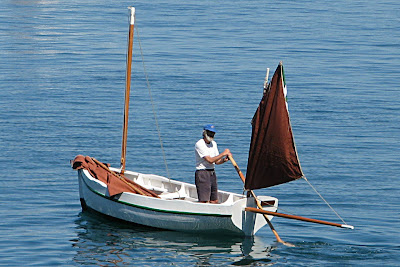 I have always found sculling over the stern a very useful technique for good manoeuvrability and like Cliff in his Wayfarer propelling a sailing dinghy with lowered sails getting in the way of normal rowing. I have even used it to tow an ocean going yacht across a harbour. Although I have never used a yuloh I suspect that a standard flat bladed oar is more efficient once the technique is mastered. The reason for this being that the pitch of the blade can be continually adjusted to give optimal power similar in principle to the variable pitch propeller of an aircraft. Of course it might be argued that with the yuloh the blade will be nearer the vertical but again it is possible to vary the slope of a standard oar.
In the attached photo I am sculling Little Lily, a replica of a 110 year old Clovelly Picarooner (see the July 22 entry in Clovelly News).
yours
Paul

I went out from Itchenor again today, because the ferry hard is one of the few public slipways that is accessible at low tide. Cliff and Sarah were packing up their Wayfarer on the opposite side of the water, so I rowed over. Cliff says he had much more success with the sculling oar today, quite possibly because he did not have an appreciative audience with cameras.
The water was utterly still, the sky almost cloudless and the sunset was fabulous. December is a wonderful time for rowing. 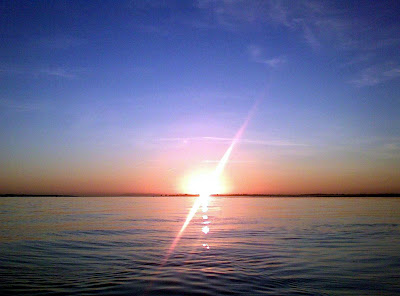