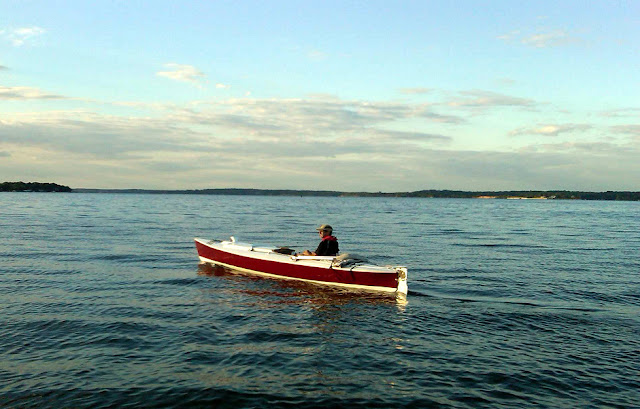 This long, slim boat seems to slip over the Patuxent River elegantly and without effort, like a swan. 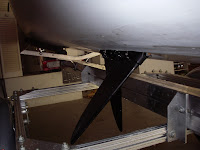 Underwater, however, like the swan, a pair of webbed feet paddle furiously. Another triumph for the Hobie Mirage Drive.
Don Polakovics built the boat to a design of Paul Gartside's that was originally made for a pedal-driven propeller. If you compare the two, the Hobie drive removes most of the complexity (look at the way the rudder is held out behind the stern to allow the prop to be retracted) as well as allowing the drive to be removed while afloat should it need attention. Clearing weed off that prop must be a nightmare. And the case for the Hobie forms a nice base for a table when camping.
Don built the boat for cruising Chesapeake Bay, where camping grounds are hard to find. The foreshore is either private or swamp, apparently. The boat can carry three days worth of water and week's worth of food. A bimini keeps the sun and/or rain off when at anchor and provides a frame for hanging a mosquito net from, something which is mercifully unnecessary round here on the south coast of England. I just love the ventilation cowl on the cabin, bringing a touch of the old ocean liners to the boat.
Don writes: 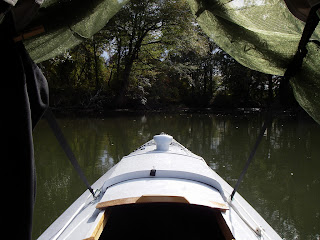 No, she doesn't really have a name yet. My paddling partners voted on Patuxent Queen (we paddle mostly on the Patuxent River....war of 1812 fame....but no grudge), which was a whole lot better than the initial proposal of "Hippo". Compared to a normal sea kayak, she is quite large.
So far the boat has worked well for camping (five nights total, three full days, two nights without touching land).  The "so far" part is because I've yet to spend a rainy day and night aboard. 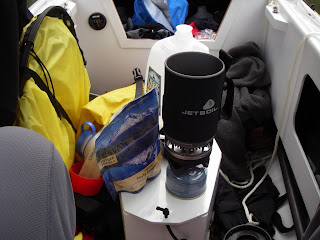 The cockpit is quite roomy for cooking, dressing, lounging etc with the mirage drive  removed and the drive well cover in place. At night I  pull the baggage out of the sleeping compartment and put it in the cockpit and then move into the berth. The sleeping compartment is very comfortable (probably too comfortable - much temptation to take a little nap, when I should be exercising).  With a 40 in beam, the boat is wide enough to sleep in most any position, including legs curled. 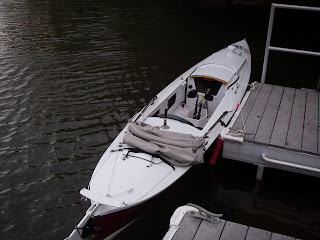 The open hatch provides a great view of the sky. I've never felt claustrophobic, but yes, I get the coffin comment a lot when people see the boat. The only distraction I've had from good sleep was when I anchored in a place with a little too much fetch and was kept awake by the waves slapping the hull  a couple of inches from my ear.....and then there was that time some critter kept scratching at the hull.
Speed?  Flat water, loaded for a week, she cruises an honest 3.5 knots (quite slow by your rowing standards). Overall daily average (30 nm), including rest breaks, is 3.2.    I can get bursts over 6 knots, flat water.  With a down wind sail (windpaddle), she'll hold mid 5's, and poke into the 6's, but doesn't seem to be inclined to go any faster. Even at 20 ft., she's portly by kayak standards.
The boat was built with a mast step and a dagger board to take the place of the Mirage drive, but I haven't built a real sail for her yet.
Thanks again for your interest Chris.
Regards;
Don

More pics are here. Thanks Don, and thanks to Duckworks Magazine for the heads up.
Posted by Chris Partridge at 21:25

This looks like a really nice way to get away without the hassle of setting up a camp spot everywhere you go. I'd love to see some pictures of the interior/sleeping quarters.