Rowing up the Tamar in Edwardian times 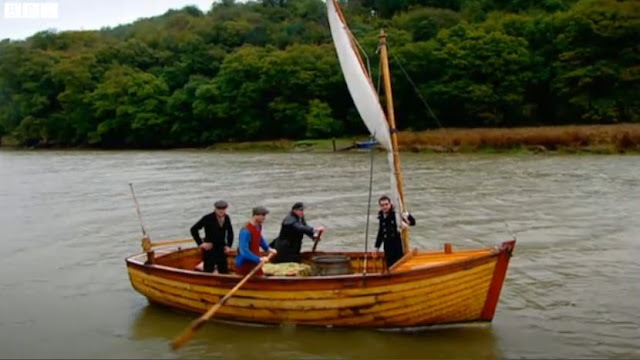 I'm really enjoying Edwardian Farm on the BBC, and not just because I have this thing for redhead and historian of scrubbing Ruth Goodman. This week the blokes, Alex Langlands and Peter Ginn, took a load of cider apples from their 'farm' at Morwellham Quay on the Tamar to the National Trust's property at Cotehele to be pressed. 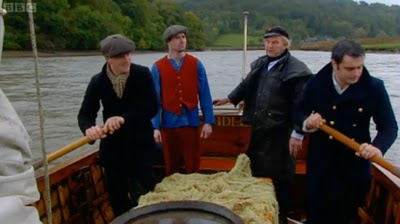 They sailed down in Joshua Preston's beautiful Beer lugger Idler. She is made of elm on oak frames with mahogany trim, and was recently restored by Stirling and Son in Tavistock. Well, I say they sailed, but the on the film it looks jolly like they had the Lister diesel running.
To get back upstream they rowed, at least when the camera was running. Joshua explained that boatmen of the pre-WWI era would have had to row if the wind was against them but only if they had the tide. If both wind and tide were adverse, they stayed put.
To row, the sailors stood facing forward and pushed, feathering on the recovery. It looks like hard work, especially with that bow sticking about a mile in the air.
Posted by Chris Partridge at 21:35

I think they would do better with longer sweeps, then it wouldn't be so hard on their backs.

You have a great blog anyway, I'm glad I found it.

Yes, longer sweeps would have helped a lot but that boat is evidently never rowed today. The oars look like sculling blades to me.