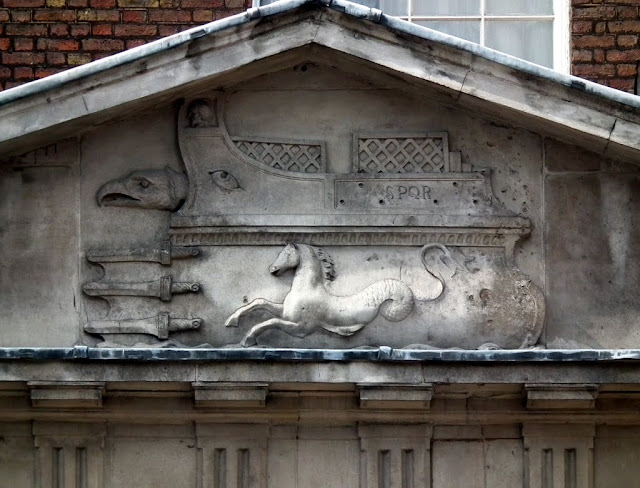 The Scottish Rowing Project is a year old, and has been a stunning success with more than 30 boats on the water or under construction. We will be testing the prototype St Ayles Skiff here in Chichester Harbour the weekend after next when Alec Jordan, whose idea the whole thing was, brings her down south for the first time. If anyone is interested in seeing her, drop me an email.
But now it's time to look forward to the next step. I want to row something really big with genuine excitement.
Battling in Roman galleys would be fun. The winner would be the one left afloat at the end of a day at ramming speed.
The great bronze ram of the galley carved in stone on the gatepiers of the old Admiralty building in Whitehall shows the sort of thing. What a great sight that would be. That would be a sport that would really catch the public imagination. Unlike the huge yawn that the America's Cup has become.
UPDATE
Alec's visit has had to be cancelled - sorry, everyone.
Posted by Chris Partridge at 08:43

A Langstone Cutters' crew would be very welcome to come up to East Lothian to try out one of North Berwick's St Ayles skiffs sometime. Bit parky at this time of year though.

Thanks for the invite Robbie - very tempting. Might leave it until the spring, though.
I may well be visiting the Perkins Green Shed soon and will take the opportunity to get out in Ulla if possible.