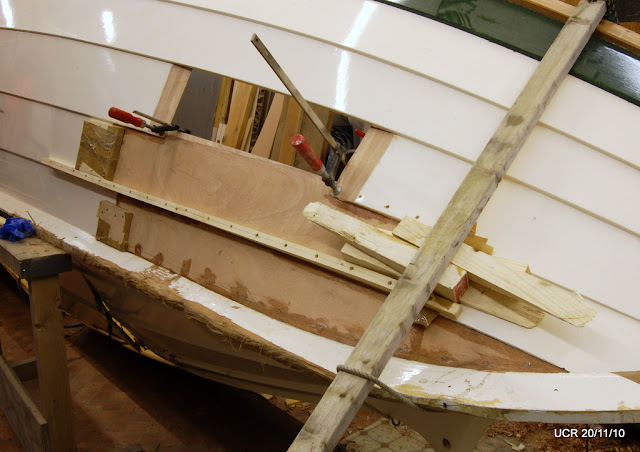 It's been a week of feverish activity for Scottish coastal rowers.
The fearless builders at Ullapool have already started repairing Ulla, holed so sadly in the recent storm. The process is being recorded here so we can all learn. It looks as though the repair will be all but invisible.

On the 14th November at Newhaven, near Edinburgh, The Wee Michael was launched in the presence of Icebreaker from Portobello and St Baldred from North Berwick, who saluted the new arrival with tossed oars.
The name was chosen by local schoolchildren who had learned about King James IV's mighty warship, The Great Michael, built in Newhaven in 1504. 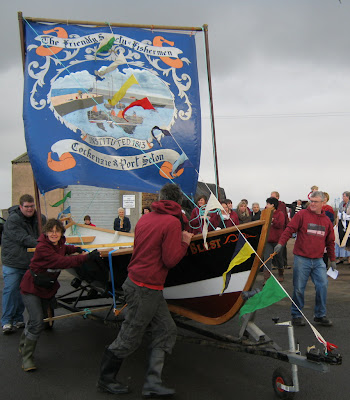 And Cockenzie and Port Seton launched their second St Ayles skiff yesterday, naming her Boatie Blest to go with her sister Boatie Rows.

And the third boat? Well, to quote Monty Python and the Holy Grail, "It's only a model", but a particularly lovely one. It was made by Norman Thomson of North Berwick and presented to the Scottish Coastal Rowing Association's Robbie Wightman in recognition of his work for the project.
For anyone wanting something to do in the dark winter nights, Alec Jordan is producing a  kit of a 1/6 scale model skiff. The model is just over a metre long and the right size for Action Man rowers or, as at least half of rowers these days are women, Barbie and Ken rowers (are they still together? Anyway, it would make a change from those flashy sports cars).
The models will be available for delivery by Christmas at a price of £49.99. Contact Jordan Boats if you are interested (and you know you are....).
Posted by Chris Partridge at 09:57