One of the annoying things about GPS and satellite tracking software such as Sports Tracker is that they insist on recording the height above sea level, and most GPS units are crap at recording height. You might as well take a barometer.
The track of our row down the Arun yesterday, recorded on a Nokia E71 phone, shows us going up and down like a fiddler's elbow, as John Lockwood wrote to point out:


Good afternoon Chris,
As a regular browser of "Rowing for Pleasure" I was intrigued by the technical device recording your trip.  As you know technology and John are rarely seen in the same paragraph so please treat the following with the disdain it deserves!
It was  the remarkable changes in altitude which caught my imagination particularly on a river. Just after mile 10 you appear to have met a 40-odd foot "Stopper Hole". I bet you were pleased to have those wash boards on the bow, just like the beach launched double enders from Staithes & Redcar (except they often have them on the stern to deal with  following waves but why let accuracy spoil a good story?).
A little later the speed dropped right off, was that exhaustion from rowing `uphill` to get out of the afore-mentioned 40 ft hole?
Enough of my silliness, I do envy you the opportunities you get to go afloat.  I am going to be lucky to make close acquaintance with water much before Barton Turf.
Keep up the reports, they make interesting diversions for the `landlocked`. I do, at times follow other blogs including Doryman and Alex & Taru The World Tour.  Now some of the photography is special: 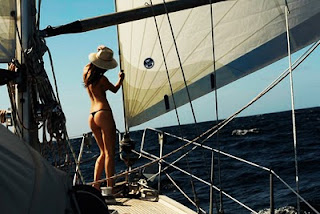 One of the clever things about Sports Tracker is that it links the photos to the track, so if you put your cursor on the graph at the point where the speed drops to zero, you will discover where we were.
I'm a big fan of Doryman, too. His latest post is about a community project for a boat shed - lovely.
I'm going to be following Alex and Taru now. I have never seen the point of ocean cruising before, but suddenly......
Posted by Chris Partridge at 20:43

The key point in that photo is a sail´s logo...¿or not?

This may be the finest rowing photograph I have ever seen on your blog.

Thanks for the plug(s), Chris and John! We need all the help we can get over here.