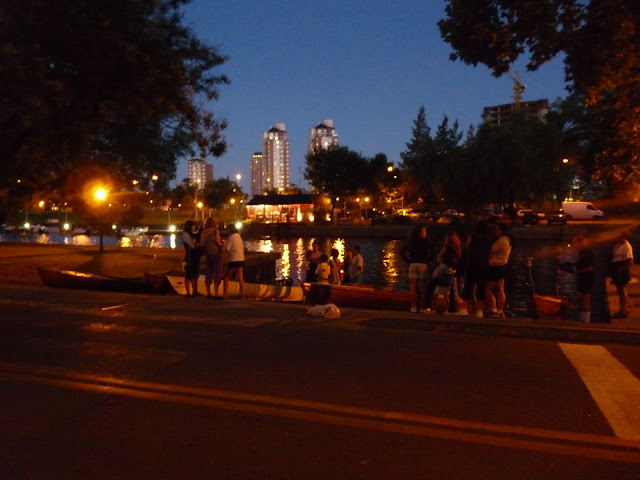 Alberto Villa of the Tigre City Rowing Club in Argentina has sent a video showing a moonlight row on the delta. It looks idyllic.
In England, we rarely get the chance to row in the dark. In summer, sundown is so late that any evening row is always in the dusk. In winter, it is too cold to row after dark. In the tropics, the night falls so early and it is so hot, a moonlit row becomes a very practical and attractive proposition.
The video is on Alberto's blog Remo de travesía. For those of you whose Spanish is 'rusty', like me, I attach a rough translation (thanks, Google Translate!).

The members of the Tigre City Rowing Club, Buenos Aires, Argentina, have continued the local tradition of paddling in the light of the moon, especially the full moon, and a couple of witnesses who documented the ride sent us pictures to share with you.
Here is a short video that one of the guests shot at the launch [Thanks Alex!] and a prior photo [thanks AAV]. The images show the launch of a boat and waiting for another off the ramp on the Rio Tigre club on Friday January 21, 2011.
In the picture the moments before the launch of some boats and the preparation of others, safety is always important but the risk increases at night, but the moon is full and the sky is clear, and the river is smooth.

Posted by Chris Partridge at 21:05

anyone fancy a midnight row up the hamble? Thought not..

Hi Chris,
The Henley Whalers row each Wenesday evening at 8p.m. throughout the year. Rowing at night whilst looking at the stars is wonderful. No need to worry about the cold;just wear layers that you can gradually discard as you warm up.

The other great advantage is that one can go to the pub afterwards feeling virtuous.
Cheers
Geoff

Geoff said: "...No need to worry about the cold;just wear layers that you can gradually discard as you warm up...."

¡yes!, we call it: Dress like an onion..., you know, with multiple layers. But only three layers of clothing are usually rigth for cold. Of course, hat & gloves

Hi Chris,
We've been rowing at night on most evenings in Leicester for years. Not bathed in moonlight though! The light from the roads and buildings has to do.I was once lit up by the police helicopter. Leicester Canal can't match Alberto's river but it's the best we've got and we enjoy it.
Best wishes,
Malc.

For the last eight years, we have rowed under the full moon once per summer and tonight - August 31, 2012 - is the night! See more at www.rowpa.org CPRA - Central Pennsylvania Rowing Association (USA)

Hi Jim - I am deeply envious. To go out at night would be after my bedtime at this latitude, and in the winter it is usually too windy/cold/generally awful/nicer in the pub.
Could you send a few pictures for the blog?
Best,
Chris