A Peapod at Beale 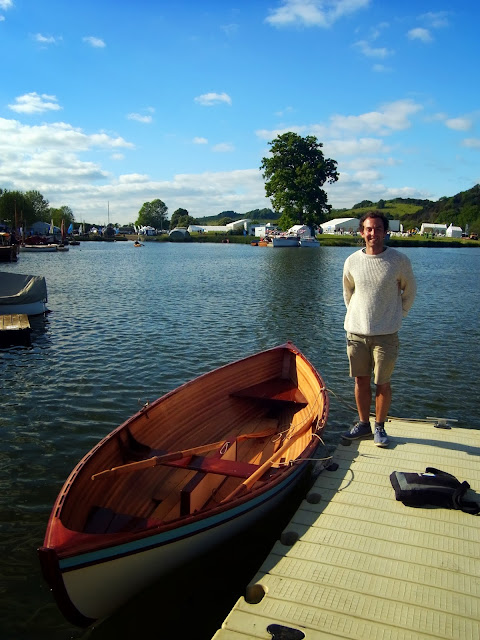 Peapods are East Coast (of the US) boats originally used by lobstermen and such. They look a bit like half a peapod, a flattish double-ended hull.
Tim Talo built Jesta, a 14ft Maine peapod from a design by Joel White when he was at the Boat Building Academy at Lyme Regis last year. It is strip planked in western red cedar, so it has none of the framing or stringers that make traditional boats a bit busy internally. There is a series of pictures of the build here.
Tim kindly let me row it round the lake a few times and it moves quickly and smoothly, in fact a lovely boat.
But...I know I am going to sound a bit monotonous about this...the oars are too short. Inboard, the handles are too far apart so your hands act independently instead of as one, and outboard the shafts are not long enough to get enough leverage in the water.
I am thinking of setting up a consultancy to advise boatbuilders on correct oar length. Fees will be modest, and payable in the universal currency of BEER.
Posted by Chris Partridge at 21:30

Hello Chris, why you do not write something updated on the correct length of the oars?. I think you're right for that.