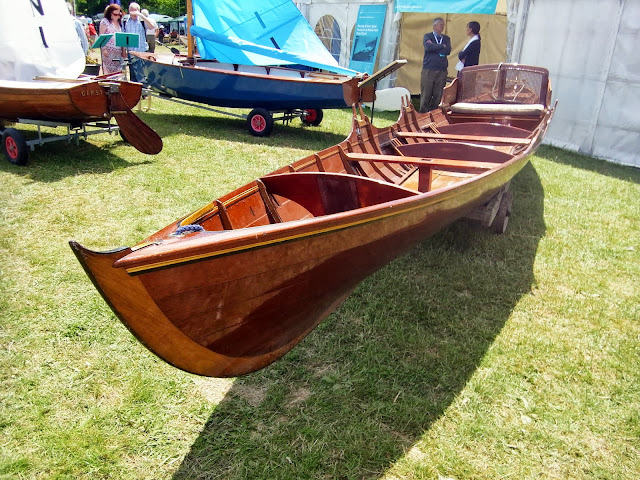 Beale Park now has a Racing and Riverboat Museum which I didn't get to see because I had to get away early on the Sunday to go downstream with the HBBR, which will be the subject of the next few posts. However, the Museum had a tent at the show and showed this gorgeous double skiff made by Wally Downing of Ashleighs Boatbuilders in nearby Pangbourne in 1906. 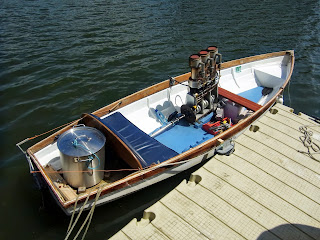 It was made for boat operators Hobbs of Henley and the Hobbs family still owns it, remarkably. It is mahogany on oak frames.
A new feature at the show was a bunch of Stirling engine fans. Stirling engines are the power plant of the future and always will be. They are theoretically highly efficient, totally silent and completely reliable, but they are fantastically complex and have never taken off. The Swedish navy had some Stirling-powered submarines but that is about it.
The Stirling engines propelled boats round the lake in eerie silence, but the engines themselves were clearly works in progress, not designed to be lovely and old-fashioned like the steamers at the show.
By the way, by a nice coincidence the performances of a Stirling engine is indicated by its Beale number. 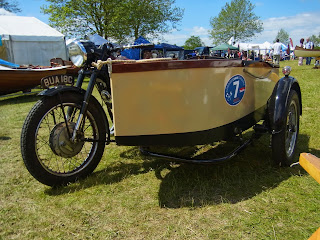 I omitted to post a picture of the sidecar/cordless canoe actually attached to its motorcycle yesterday, so here it is.

Which gives me an excuse to show you a photo of the wonderful boat-tailed car on the Henwood and Dean stand, as usual.

Posted by Chris Partridge at 19:27