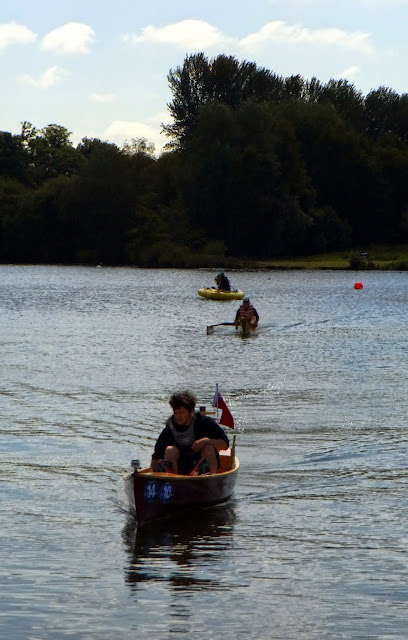 It wasn't rowing but it was sure entertaining - Water Craft's Cordless Canoe Challenge produced the usual rich crop of boats driven only by standard power tools.

They varied from the beautifully designed and crafted to Heath Robinson concoctions of string and elastic bands; from the straightforward to the wonderfully eccentric.
Joe Rutland made a return appearance with last year's winner, Velociraptor, to triumph once again. I just love the design values of this boat, simple wooden parts bringing four cordless drills into a recognisable 'four cylinder' engine. 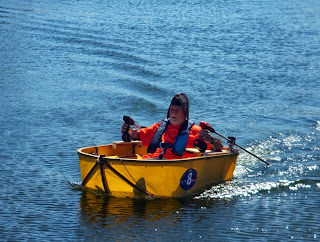 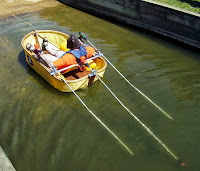 The other contenders were largely based on long thin kayaks, but my favourites were clearly there for fun rather than any serious hope of winning (though the prize, two top-of-the-range Makita cordless drills) was certainly worth having.
One guy had a cordless drill in each hand and one mounted on the transom, switched on by pulling a string run over his shoulder and round his foot.

Another had created a wonderful detachable sidecar for his classic bike. Complete with a properly salty wheel. Left hand down a bit, Mr Mate!
At the prizegiving, Joe Rutland extremely generously asked that his prize be distributed among the runners-up instead, as he had won last year.
Joe is about to offer a pedal-powered version of Velociraptor for sale - see his website here.
Posted by Chris Partridge at 21:19

Love that velociraptor... the drills are neat but what won me was the throttle controls...

Thanks for the write up Chris - also thanks for the link! Much appreciated! I'm glad you enjoyed the competition. I'm not sure if I'll enter again next year as it takes over your life for the months leading up to.