A Row down the Visla 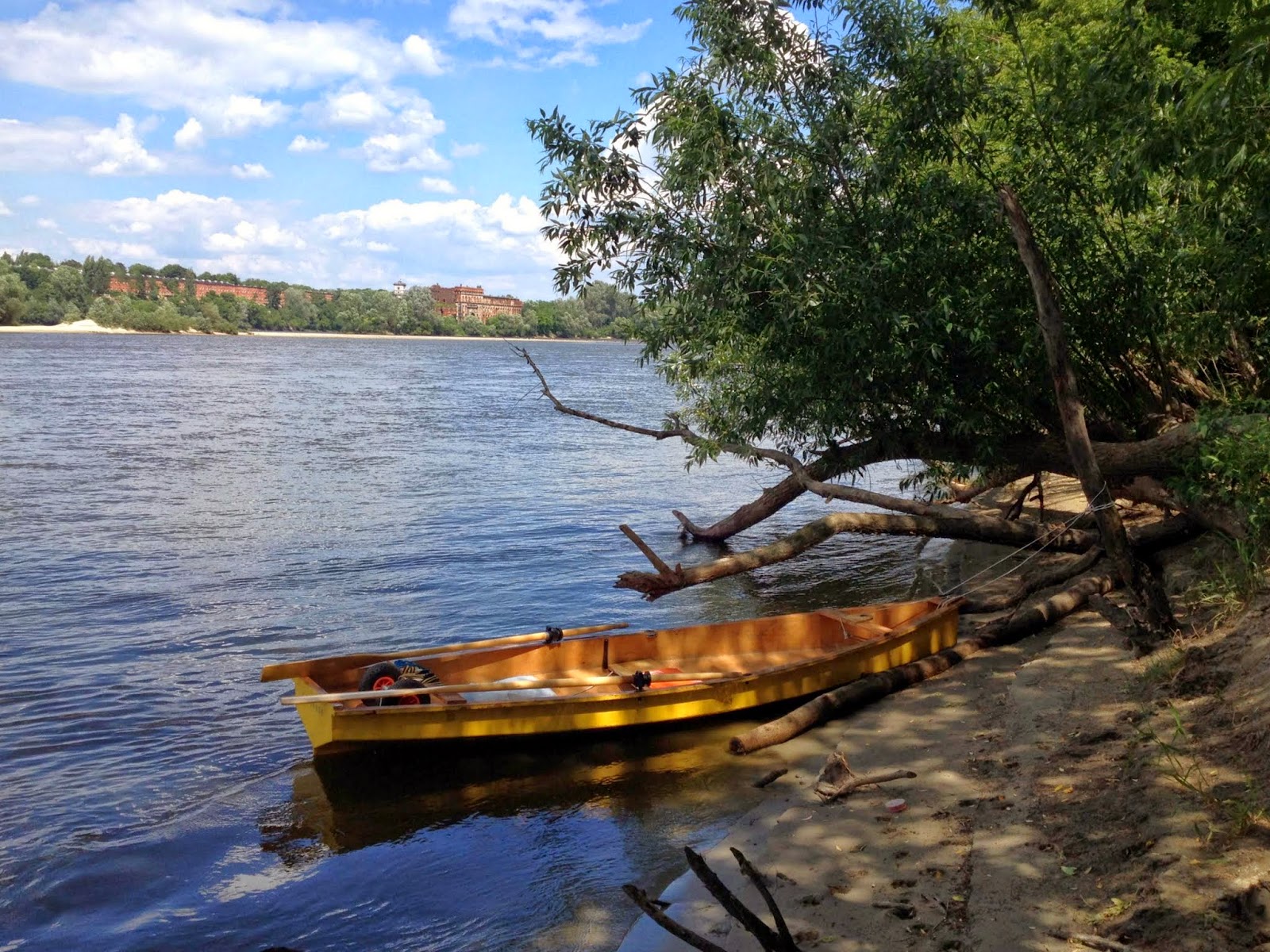 This is the Visla or Vistula river that runs through Poland from the Carpathians in the south to Gdansk on the Baltic. Wojtek Baginski wanted to row from his home city, Warsaw, to Berlin, but fate had other plans as he reports:

This year I decided to make true my old plan to row from Warsaw to Berlin by rivers and canals. The route is downstream on the Wisla river, Bydgoszcz canal, downstream on the Notec, Warta and Odra rivers, along the current-less Oder-Havel Wasserstrasse, and finally downstream on the Havel river, finally entering Berlin by the canal system from from the west.
Visiting Berlin last winter for another reason, I had found out that Nordhafen, at the border between the Berlin districts of Mitte and Wedding, would be a nice place to end the cruise. Nothing much impressive there, just an abandoned river harbour and that particular kind of emptiness left by the Berlin wall. I had assumed that all the cruise would be like that: nothing special, no extremes, just a journey. The only challenge was to be back in my work on time 1st of July, which meant about 10 days for the trip. The distance is about 700km, river currents make at least 4kph, I’m able to make another 4kph. Five hours of rowing twice a day ought to give 80 km.
The idea had appeared in my head many years ago, so the practical preparations were short and mainly consisted of limiting the number of things to bring along. I was confident about my “Flaneuse”, a very good rowing boat, 14ft Robote designed by Jim Michalak, homebuilt and tested in many adventures. Also about the pair of nice Finnish oars bought at the nautical department of a construction supermarket. And the small dolly to pass by navigation locks if closed too long. I also had prepared one big waterproof bag, one small waterproof bag, one waterproof envelope containing maps. At the morning of the departure I grabbed the big bag and weighed myself with it, as I used to do before air travel. 110 kg… I decided to limit 10 days food reserve to 2 days only. I retained a little gas stove, an espresso maker and a cosmetics box. The tent was out, the air mattress out, only the sleeping bag in, for any case. One set of sailing clothes for all the way, and one regular polo-skirt and trousers for return trip by train, or family car maybe, as I found it very nice to keep a secret set of fresh clothes to the very end.
The time of the cruise was carefully chosen to meet at least two factors favourable to the project: the longest days of the year in June and high water on the Wisla river which usually floods at this time of year because of water coming from snow melting in May in the high mountains in the south.
I had a good start from the centre of Warsaw at Port Czerniakowski in the late lazy holiday morning, June the 19th. The first 40km, sheltered from the wind, were really quick and nice. Average speed 10kph. I was rowing among islands I could only see on maps or through a jet liner window so far. Great archipelago. Relaxing lunch on the shore at the end of that leg.
But once the Wisla turned west, my Tilley hat, if not properly tied on my head in Port Czerniakowski, would surely get blown away. The speed has been reduced drastically. The stopping factor was a strong wind blowing those days from the west with a speed of 6m/s in 10m/s gusts lasting as long as 30min. It wasn’t perceptible in the city of Warsaw at all… Now, having the wind directly against me, no shelter, water just "boiling" around as waves were generated both by the wind blowing upstream and the river current over shoals, I started to realise that my calculations might not be worth much. I could observe clouds of sand over distant beaches and islands. Those days the Wisla at that area was 300-500 m wide but still shallow. As the northern river bank presented a vertical cliff about 30 m high, I kept it as close as possible, literally touching it with the oar, to look for turbulences and wind reflections which might make the water surface smoother. This way I could also constantly observe progress, what was very important to keep a positive attitude.
However, from time by time I had to leave this narrow zone because of sand bars, more or less submerged stone dams or fallen trees, or even fishermen. Sometimes I had to cross the river looking for the way through the shallows, to gain the opposite low bank. The Wisla sandy shoals are like submerged deltas, with many arms, canals, traps etc., curving with the river stream. If there's a possibility to study the water surface, you can choose your way. But if there's no such possibility, you can count just on your intuition and luck. I had my good luck most of time and got stuck in sand in the middle of the river only once.
Thanks to this year's rowing experience in Gdansk Bay I wasn't worried about the boat's behaviour, my worries were mostly of unexpected slow overall progress and, when looking at a submerged stone just passed by, of the possibility of perforation of the hull, forgetting it once a stone disappeared from sight. In the evening I reached little town of Czerwinsk, on the right river bank, a place with a good road connection that would enable me to take “Flaneuse” back to Warsaw using a car. I made only 28 km in more than 5 hours.
The weather forecast was for the same weather conditions for next few days and more than 100 km of same wide wild river ahead of me, so I decided to end the journey. However, those 28km were so impressive that I feel fully satisfied with the cruise.

Which means he has most of the route still to cover. I must say, it looks very interesting and exciting and I look forward to his next attempt!

Posted by Chris Partridge at 19:35