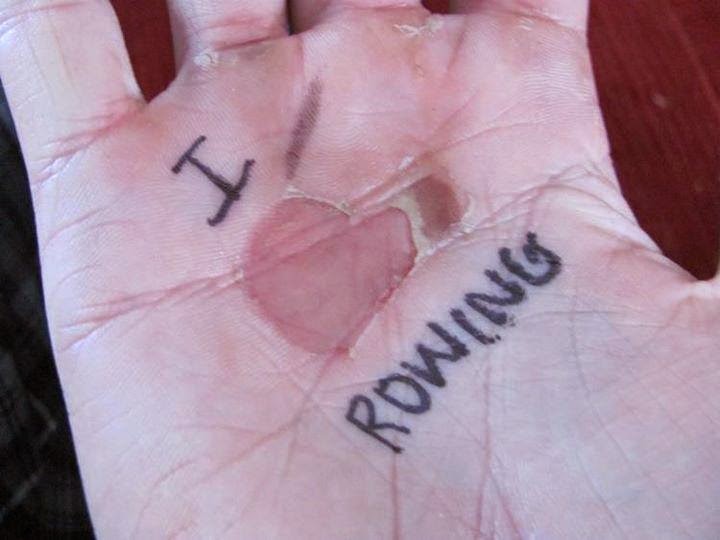 "With the 60 kms of somewhat serious rowing now only just over 10 days away, I am hoping that the many metres I have under my belt will see me through (it's better to think in the smaller units since I certainly don't have the marathoners' minimum of 10 times the distance clocked up in training).
One thing which makes the prospect less awesome is the fairly clear anticipation of what is involved, in comparison to the two female rowers recently recruited who are having all sorts of doubts over the rigours to come. It's true that 5½+ hours non-stop is a long haul if you are used to more frequent toilet visits, but my modest experience (three serious outings so far), getting rid of liquids is the least of the problems. It's a fact though that my trips have all be made in balmy Scandiwegian weather - blue skies, light breaths of wind from time to time but generally perfect boating weather, when the consumption of water or a mineral drink was commanded by the cox regularly every 20 minutes. Sweat was an ample method of liquid absorbtion, full stop!
Another headache for even the hardest of rowers are the blisters. I recently watched an olympic training camp video, and near the end of the two weeks the participants turned their palms to the camera, and should have advised on using a colour filter before the filming started. Six weeks plus of twice weekly outings has toughened up my calluses, but they will surely reappear on the day. This year we are entering the Sat morning 'race', necessitating a very early rise at our country lodging to be on the water about an hour before the 9 o'clock start. And if the weather continues in anything like the current Finnish style we will have at least a couple of rain showers. Whether it dissipates the heat from sweaty palms faster than it aggravates the blisters remains to be seen.
I think in previous years I have blindly trusted in my excitement to carry me through - this year I am attempting to be better prepared: regular training, doing some extra exercises, even planning to buy plastic tubes for an automatic drink contraption - traditionally each pair stops on the cox's command, quaffs a few mouthfuls from an adjacent bottle, and returns as quickly as possible to the oar. But, as before, the essential appeal is the prospect of undertaking the communal hardship and at the same time committing to a project that depends not soley on my exertion but on the development of some intangible element of team spirit that exceeds to sum of individual talents. At least I think that there is a greater chance of it materialising than on certain soccer pitches of Brazil."

I took part in the annual Round Hayling Island race on Sunday, and it was brilliant. Only 14 miles but long enough for me. The weather was fantastic, the company was great and despite being deprived the carbon blades in favour of the younger crew in Bembridge we rowed Sallyport round in 2hr 36min 46sec, coming in fourth of 12. Weymouth's crack crew in their Cornish pilot gig Tristan got round in a cracking 2hr 13min, Bembridge in 2hr 26min and Lower Thames RC in their skiff Spirit of Trafalgar in 2hr 36min. Nearly caught them, and held off another Weymouth gig for the last five miles.
After the race, my hands also looked very like the picture at the top (which Anthony swiped from the website of Camp Randall RC).
Sallyport's crew was motivated by three things: Aspiration, Determination and:

Posted by Chris Partridge at 12:34

So sorry to hear about your and Tony's blisters (love that picture, though - proof positive that long-distance rowers can be creative types), but you really don't need to - check out No.2 in the "Rules of Expedition Rowing"! http://expeditionrowing.blogspot.co.uk/2014/05/the-rules-of-expedition-rowing.html