Curse this wind! No more curried eggs for me! 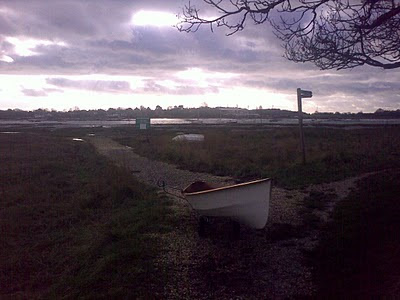 It was westerly F5 gusting F6 and close to low tide as I went to Itchenor to meet up with Martin, Cliff and Len of the Dinghy Cruising Association. Cliff's plan was to go with the ebb to East Head, have lunch and come back up with the flood, but the wind would have meant a long beat for the sailors and a long hard slog, so we headed up the relatively sheltered Bosham channel.
I usually go out at or near high tide so the water seemed unnaturally cramped and the banks of mud on either side were less than inviting. On the other hand, there were flocks and flocks of wildfowl feeding. 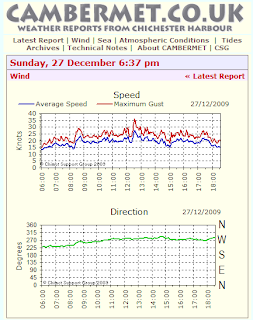 Curiously, the wind was not a big problem until I got Snarleyow on her dolly for the long trudge up the ferry causeway, which at high tide is a short stroll. The wind kept blowing her off her wheels, so I had to hold the bow with one hand and the windward gunwale with the other to keep her from flying off into the mud. Very uncomfortable and backbreaking.
When I got back I looked up Cambermet, the weather station inside the harbour mouth, and discovered there was a 35kt gust at the time. I took the picture with my phone - you would never believe that was midday.
Anybody recognise the quote in the title?
Posted by Chris Partridge at 18:25

'No More Curried Eggs For Me'

'No More Curried Eggs For Me' is a gorgeous collection of the best-known comic sketches of recent years, made famous on film, television, radio and record - and now all together in book form. Here is the Parrot Sketch from Monty Python, Alan Bennett and his Norwich telegram, Rowan Atkinson's school roll-call, Basil Fawlty 'not mentioning the war', Groucho and Chico not signing a contract, Hancock only just giving blood, Steptoe and Son in their very first programme, the Goons at full throttle. . .and many more.
'No More Curried Eggs For Me' has been cooked up by Roger Wilmut, whose past concoctions include The Goon Show Companion, Tony Hancock 'Artiste' and From Fringe to Flying Circus.

Yes, but which show does it come from, eh?
Hint: read it in a fruity upper-class officer voice.

bri in baltimore found a break in todays weather 45 dgrees no wind to row 3 hours on the Severn River above the US naval Academy, 2:55 mins without seeing another boat moving. can anyone enlighten me on frontrower or ez row systems, i want an alternative to my alden star, bolger dory , come row with me on our great bay and thanks for a wonderful blog Bri

'PETER SELLERS plays
*
Major Dennis Bloodnok, a devout coward either retired or deserted from the Indian Army. He too is a thief who tries to steal from one and all. He is afflicted with extreme gastric distress, and his introductory theme is usually followed by a bizarre series of explosions and bubbling noises that represent his stomach rumbling. He comments on these sounds himself with "Quick, nurse, the screens," or "Oh! no more curried eggs for me!". Occasionally the sound effect won't play, and he'll comment, "I'm cured!"'

I hope this has helped to expand the frontiers of human knowledge....