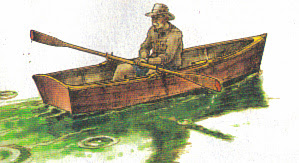 Well hallaylloo, Wooden Boat has added a volume on Oars, Oarlocks and Rowing to its cut out n'keep series, Getting Started in Boats.
It's in the current issue which I have only just got because our local farm shop has been taken over by the Coop and they have axed the wonderful selection of magazines they used to stock and now hold only Heat, OK, Yeah! and Celebrity Bonking. Bloody Coop. So I had to get my Washington-based sister to pop one in the post. Thanks, Sis!
Anyhoo, the supplement is very handy. Karen Wales explains oars and rowlocks in simple terms with lovely clear illustrations by Jan Adkins. There is a great explanation of an approved rowing style (I won't say 'correct' - ain't no such thing) by the great Peter Spectre.
One thing I would respectfully disagree with, however. Wales recommends positioning the rowlocks by measuring 14in diagonally from the rear face of the thward, whereas the best method is to attach G clamps on the gunwale, get in the boat and swing the oars on the clamps, as in the picture below taken during construction of my Sandpiper, Nessy. Then move the clamps back and forth until you get the perfect action. 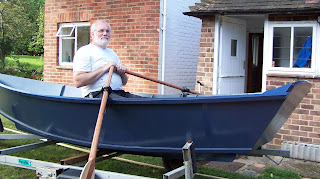 Posted by Chris Partridge at 21:09

Experimental lock positioning, I love it. I would be the fool trying to measure the position to the correct nanometer, as advised by experts. Thanks for the tip!