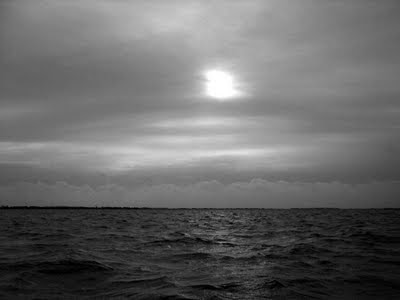 When will I ever learn?
I had a choice of outings today. One was to join the Dinghy Cruising Association in Langstone Harbour, the other to tag along with Langstone Cutters who were, paradoxically, going out in Chichester Harbour.
I hadn't met up with the DCA for a while, so I headed for the D-Day slipway at Bedhampton. But I failed to look up the weather forecast. Dammit, it looked OK and it wasn't raining. What could go wrong?
Langstone Harbour is a big expanse of water, and Bedhampton slip is at the windward and shallow end so the water tends to be very choppy in any sort of blow. But the slipway is sheltered from the stormy blast.
So it looked fine to me. I launched and rowed into the harbour, only to find it was, let us say, interesting. Not dangerous, not threatening, but not fun. Once again, I had failed to do a proper recce.
So I turned back, put Snarleyow back on the trailer and drove round to Chichester Harbour where conditions were much calmer, and had a brisk row for an hour or so.
I hoped to link up with the Langstone Cutters boat Gladys, but couldn't see her anywhere. Turned out they had rowed to nearby Emsworth and had a nice cup of tea. Damn. Here they are, returning, full of tea and buns. 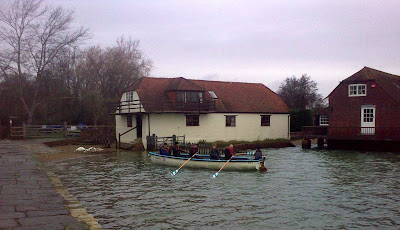 Posted by Chris Partridge at 22:34