A tiny bit more boating on the box 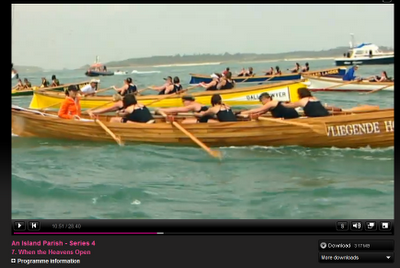 Last night's episode of An Island Parish featured yet more agonising by both Methodist and CofE ministers and too much detail on the lovelorn and now tragically dog-bereft vet, so film of the Dutch pilot gig crew's performance in the Pilot Gig World Championship was sadly short. Only the women's race was recorded, but they did well. There is some nice footage of gigs sailing too. British viewers can catch it on BBC iPlayer. It's all between 10 and 14 minutes in - don't bother about the rest.
The Scheveningsche Roeivereeniging rowing club website has some good pics of the boat under construction, but no snaps of the races unfortunately.
Posted by Chris Partridge at 20:53