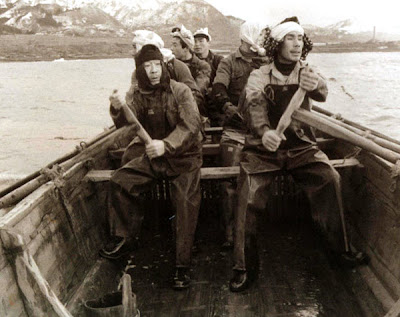 This picture on Indigenous Boats gave me pause. What on earth are those oars with handles all about?
The picture was provided by Douglas Brooks, who is researching traditional Japanese boats or wasen in the finest possible way, by getting apprenticed to boatbuilders and making a few.
Douglas writes to say that the boat is probably a kaidenma, a fishing boat that was used to pull a net round a school of fish, like seine fishing over here. According to Douglas:

That is a photo from Akita Prefecture way up north, where they do use a large clunky paddle like an oar. Interesting in some ways because they have more western style oars up there, but I suspect that in a narrow boat those short things have advantages.
As far as how they work, its used just like an oar, with a rope oarlock and sometimes a thole pin. I have also seen these used hanging in a rope loop and used like a steering oar. In fact the shimaihagi that I built in that region in 2003 was so equipped.
You tend to see these in boats with many rowers, yes they have to take a short, abbreviated stroke, but what these guys are doing is pulling a net around in a circle to close it, so its not intended for long distance travel - they may have even been towed out to sea by partner fishing boat. In a few places in Japan these are called kaidenma and are now used in festival races. It may look terribly inefficient, but these boats really fly when you have twenty or so guys rowing.

Douglas has two fascinating sites, his blog chronicling the construction of a traditional sabani on the island of Okinawa, currently under way, and his website which is a huge source of information on the Japanese and American ways of boatbuilding.

Posted by Chris Partridge at 22:41

Just for the record, that boat is specifically called a hatahatabune (hatahata being the very small fish that they catch). A boat rowed by many people using kai (paddle) are called kaidenma as a more generic term. Hatahatabune, by the way, a hybrids dugouts and plank-built boats (what we might call log canoes in English and mudamahagi in Japanese). The bottom of that boat pictures is nearly six inches thick, with vertical planks added to the sides. I picture your readers rowing finely built whitehalls and the like, so this explains the looks on the faces of those men rowing that thing!

Thanks for the posting!