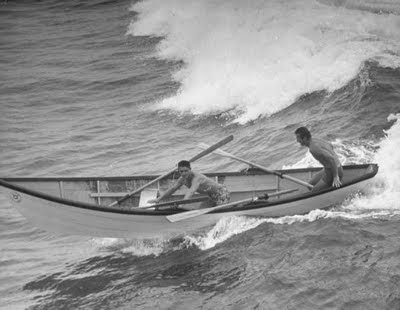 Kelvin linked to this picture in a comment to my last post.The caption reads "Men riding waves in a canoe" which is wrong in almost all important particulars.
OK they are men (well spotted!) but they are not 'riding waves' but riding surf, and they are not in a canoe but a surf dory.
Kelvin also says it may not count as Rowing for Pleasure, with which I agree, but it sure as looks like Rowing for Fun.
The picture was taken by John Florea at Hermosa Beach, California, in the summer of 1948, but the boat is pretty well identical with the surf dories built by Simeon Lowell in his boatshop in Massachusetts in the 1790s.It seems the surf or 'Swampscott' dory was round-bilged, which gave extra buoyancy amidships when returning through the surf.
They are still building surf dories at Lowell's, and the type is still a popular type for amateur boatbuilders - designs are available from Selway Fisher. Actual surf riding is done mostly by boats made of super-elasto-bollockase or something in which surfers can do this:

(I have blogged this before but what the hell).
Posted by Chris Partridge at 20:43

Surf dories were in regular use by Californian lifeguards in the late 20th century.
The video is of an Australian surf boat.
For some related images see:
http://www.surfresearch/00000000x.html