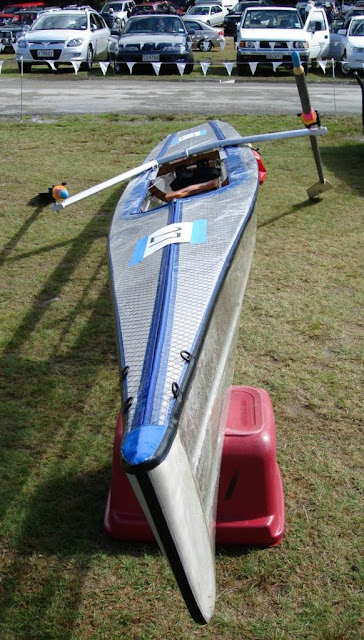 A boat that looks back to the past and another that looks to the future were caught on camera by Owen Sinclair at the Rotoiti Classic Boat Show in Nelson Lakes National Park, South Island, New Zealand recently.
The past was represented by a reproduction of an old whaling boat, the future by a dramatically transparent skin-on-frame skiff. Owen writes: 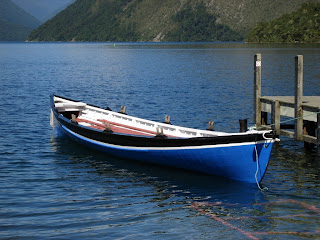 These were the two most interesting rowing craft at the show; the whaler was built recently by Ron Perano to the lines of a whaleboat which was built in Tasmania, used for whaling in Cook Strait (I think this was one of the few shore-based whale fisheries  in the world, if not the only one) and donated to the Canterbury Museum in 1926.
The Perano family was one of several associated with whaling and has many descendants in the area today. Another whaling family was the Guard family and a Guard was on the whaleboat today. 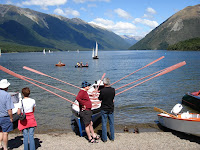 I was offered a row, an entirely new experience. The oars are long, heavy and flexible and pivot between thole pins. 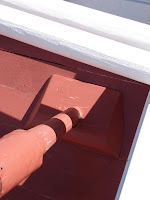 Although it was an impromptu crew with half probably aged over 70 the boat moved along really well with six rowers and a man steering with a sweep oar.
The oars were stowed, once the whale was harpooned, in sockets: one photo shows the sockets and another shows the oars in the stowed position. A wonderful opportunity, completely unforeseen and greatly enjoyed. Thank you Messrs Perano and Guard.
The sliding seat craft is coated with transparent film, secured in place with zips. The frames are plywood, the stringers are alloy tubing. The boat collapses into a bag for transport. This is a prototype and a project of Kent Luxton of KJL Sails, Picton. Full of innovation. I will try to get more detail for you sometime.
Regards,
Owen Sinclair 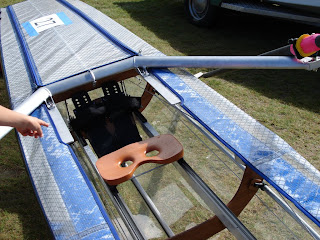 I don't know which of these boats I want to row more.
The whaleboat looks huge fun and very seaworthy, but the ability to carry a rowing shell in the boot of the car and assemble it into a boat that will attract huge amounts of attention wherever it goes is also very appealing.
Of course, one could own both and carry the collapsible shell in the whaler. Double the fun!
Thanks again, Owen.
Posted by Chris Partridge at 20:05

Thanks for posting the folding sliding seat rowboat. There are so many suppliers of folding kayaks that I thought there should be a folding skiff, but getting sufficient skin tension for the higher speeds must have been the issue. This boat looks to have high skin tension and looks very promising, especially if it can be home built Tom Yost style, see
http://www.yostwerks.com/MainMenu.html
Hope to see more soon, Brian

Love looking at the photos of the whaler. When in the navy in 1965 I was in the HMNZS Tamaki whaler crew that challenged for the Hawea Cup, which we won. Only a few weeks later we were posted to HMNZS Philomel and immediately put in a challenge against HMNZS Tamaki for the Hawea Cup. Needless to say we won it!! The Hawea Cup is no longer competed for. On sports days we used to fow the whaler across the harbour and go to a local bottle store and buy cherry. We then used to row up to the harbour bridge and tie up to a pylon. Got caught out though when an ex navy type spied us and reported us to Philomel. Every sports day from then on we had to row up and down in front of Philomel, in full view of the quarterdeck.. Memories.