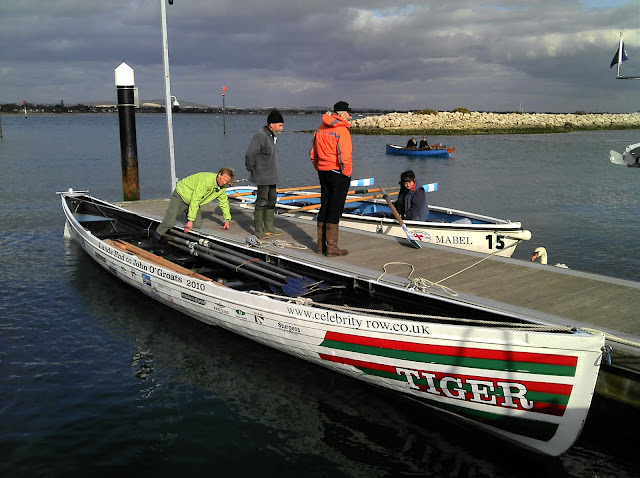 Langstone Cutters went out on Wednesday to Emsworth for beer and chips, and on the way back we dropped in to Northney Marina to take a little look at the Cornish pilot gig Tiger, the boat of choice for the Reivers12 row from London to Paris and back.

Tiger is a very unusual pilot gig. According to the rules of the Cornish Pilot Gig Association, gigs must be traditionally built with wood and stuff, but Tiger is carbon fibre throughout, except for the thole pins where wood is good because they break if someone catches a crab, preventing dire structural damage. She is extremely light and should be fast as well as seaworthy.
Apparently the original set of oars went missing so Reivers12 have brought in a new set, oddly traditional wood macons with proper leathers.
Tiger was used in last year's attempt to row from Land's End to John o'Groats via the Bristol Channel, the canal network and up the east coast. It seems they didn't like Tiger very much, but this may have been because they were rowing her along narrow canals which are not her natural habitat.
Can't wait to give Tiger a bit of a thrashing.
Posted by Chris Partridge at 21:46