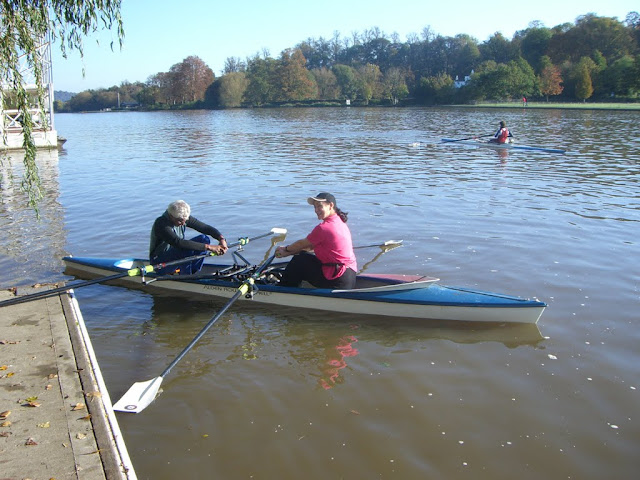 Bet you had a double-take when you saw this picture. Most people do, apparently, when they see this boat on the Thames at Henley. Surely these rowers aren't going anywhere, facing each other like that?
There is a perfectly rational explanation, of course. It is Geoff Probert's Alden double, with one of the drop-in rowing units dropped-in backwards, so Geoff can coach novice rowers at the Phyllis Court Rowing Club without having to crane his neck round all the time.
Geoff explains:


"I find this use of the Alden the best for absolute beginners as it's the only way that I can see what they are actually doing. The alternative is to have the units the normal way around i.e. as a double and sit behind them which means that you can't actually see what they are doing. 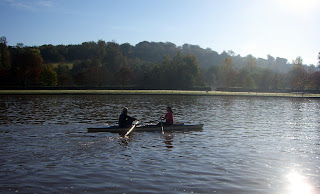 The real advantage of using the Alden in the manner shown is that the beginner can see what you are trying to show them. Once they have understood the basics, we just go back to the pontoon and put the units the normal way round and use the boat as a normal double.
I do get lots of comments from passing boats as quite often they can see that something is unusual but can't quite put their finger on it! I once got a comment from a passing cox about being on the wrong side of the river (we have an agreed circulation pattern here for rowing boats). I had to point out to him that I was in the right and that he should try to understand which end of a boat is the bow end.
The lady in the boat with me had never rowed or sculled before. She is now a regular in one of our quads and has entered a couple of Head races as a Novice Veteran (although now that British Rowing has adopted the term Masters instead of Veteran she is a Novice Master)."

Today I got the chance of rowing Steve Rooke's Alden, another double but with the rowing unit in the middle to make it a single. Getting in was a doddle - it is very stable. She rows easily, with only a slight slap under the bow to remind you the bottom is flat.
Tracking can be a bit wayward, due again to the flat bottom. Steve is thinking of installing a small keel just an inch or so deep to help correct the problem. It will be interesting to see what effect it has on tracking and maneouvrability. But my impression was that the Alden is safe, robust and above all fun.
Posted by Chris Partridge at 20:04

I just thought it was designed to facilitate pleasant chatting while out for a row!