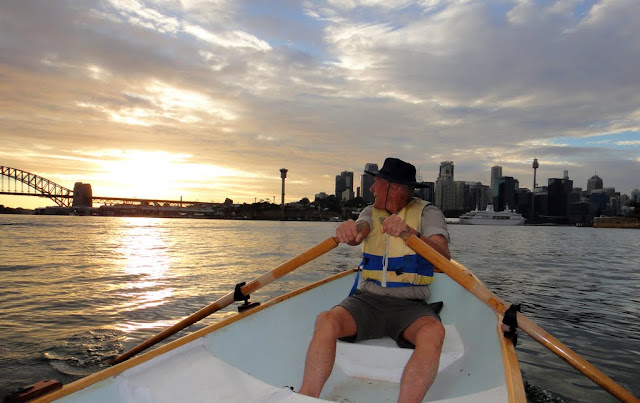 Peter Miller in Sydney is looking forward to the annual race round Dangar Island in the Hawkesbury River. It is one of those lovely places without cars - even golf carts are frowned on - and everyone owns a rowboat to get to the mainland. There's a nice video below.
Meanwhile, however, Peter has been rowing in Sydney Harbour again, this time with his friend Paul at the oars, as he explains:


Chris,
As we approach Easter a young rower's thoughts turn to the Dangar Dory Derby. The race held every Easter Sunday is once around Dangar Island (located in the Hawkesbury River an hour north of Sydney). The race is about 2.7 km, takes around 17 or 18 minutes and some of the keener rowers have started thinking of a training regime.

However I was able to go out on a leisurely row early the other day with my mate Paul. He did the rowing to the cafe for breakfast which freed me up to take a few photos. Starting at Mort Bay where the tug and ferry fleet are moored we rowed around to Pyrmont which allowed for a great view of sunrise over the Sydney Harbour Bridge.
It was another good day.
Cheers
Peter