A footnote from the HBBR Thames Raid 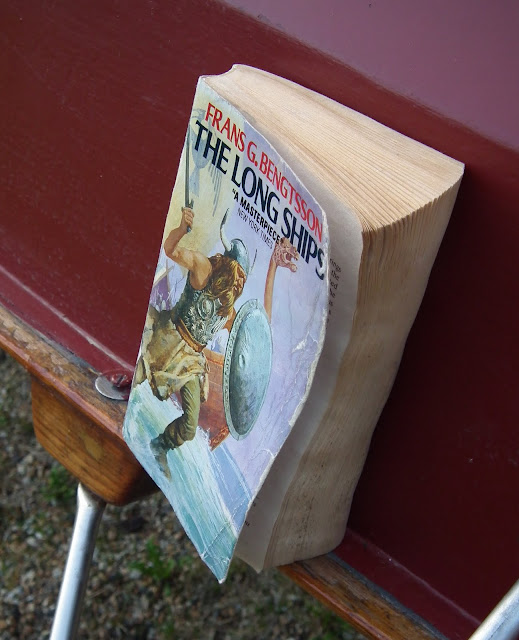 You probably don't remember, but on the recommendation of Goran Buckhorn of Hear the Boat Sing, I took my copy of Frans Bengtsson's The Long Ships to read on the Home Built Boat Rally's Thames raid.
The volume was pristine when I packed it, but the bag proved to be much less waterproof than it looked and it got soaked in the rain that lashed down on the first day. You would not believe how long it takes to dry a book out - the pages are still a bit damp two weeks later. That the text was still legible was a stroke of luck as I had to spend some time in my tent over the next few days waiting for the rain to stop, during which time I discovered that The Long Ships is one of the best books ever written for being cooped up in a tent with.
It is a ripping yarn, fast-moving, exciting, funny and even informative.
The tale is of Red Orm, a Viking living at the time of Ethelred the Unready around the year 1000 AD. As a boy he is kidnapped by other Vikings and taken on a voyage to the south, where he is captured by the Moors of Spain and sent to the galleys. He eventually manages to return via the Ireland of Brian Boru and the Denmark of King Harald Bluetooth. Later, he joins the Viking invasion of England, taking his fair share of the Danegeld. His final voyage is through Russia to the River Dneiper in search of hidden treasure. There is never a dull moment.
Bengtsson is not always historically accurate, and accuracy always takes second place to a great story, in which he follows the tradition of the Icelandic sagas - his plain, unadorned writing style was deliberately based on the sagas. There are many details that ring true, however, such as:


"Throughout his long term as one of the Caliph's galley-slaves, he rowed a larboard oar, which involved sitting with with the oar on his right and taking the strain of the stroke on his left hand. Always afterwards, as long as he lived, he wielded his sword and suchlike weapons with his left hand, though he still used his right arm for casting spears. The strength which he gained through this labour, which was greater than that of other men, remained with him and he still had much of it left when he was old."

Only a few days ago someone was telling me that official British Rowing policy is to refuse to allow young rowers to specialise in stroke or bow side, because the growing body can become permanently bent out of shape if they don't swap sides regularly.
Goran, many thanks for pointing me to The Long Ships. It is the most entertaining book I have read in years.
Posted by Chris Partridge at 21:12

Dear Chris - It is always with great pleasure I recommend Frans G. Bengtsson's The Long Ships, which I truly think is one of the best novels ever, with its mix of fiction and facts. It it especially well-suited if you find yourself "stuck" somewhere so you can immerse yourself in the text. A good thing is that there is plenty of cheap copies of this novel around on the internet, for example at www.abebooks.com On this web site you will also find some of Bengtsson's other books. Among these, I would like to recommend A Walk to an Ant Hill, which is the only collection of his essays translated into English. His essays also prove to be witty and funny.

Is it good luck to lend a suitably weathered copy to an old seafaring chum?

You may have it, old bean. Just don't complain about the condition....

Hi Chris,
British Rowing policy is stronger than you suggest.

Juniors who have not attained the age of 14 by the 1st September preceding an event are not allowed to compete in a sweep-oared race (Rules of Racing 3.3.2.c). Some clubs extend this to age 15 for Junior Women.

I coach more , ahem, mature people who come to rowing late in life and always recommend sculling rather than rowing. Much less strain and twisting, although of course we do row in Molly at any age.
Cheers
Geoff