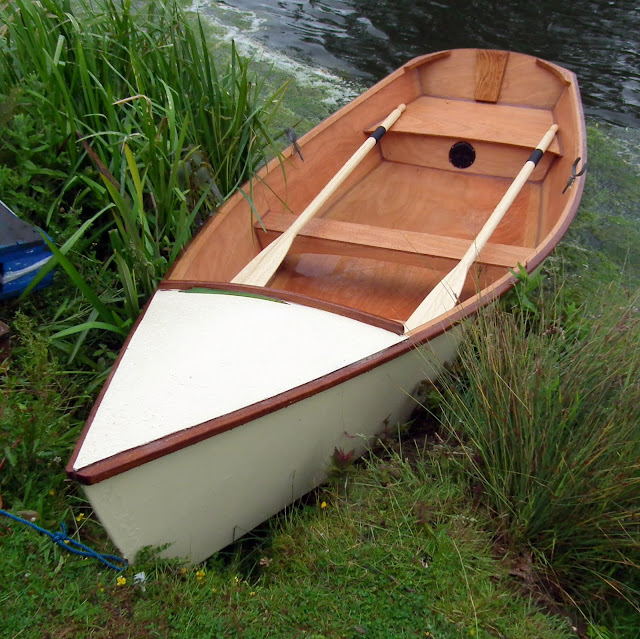 Trudging through the rain at Beale Park I was hailed cheerfully by a bloke in the Classic Boat tent, who wanted to give me a copy of his mag. He was clearly demented with boredom - by then most of the punters had gone home to dry out in front of a nice warm fire.
I explained that though Classic Boat is an admirable publication in many respects, I don't read it any more because it doesn't cover rowing. Whereupon he insisted on giving me the current issue as well, which features cartoonist Guy Venables building a rowing boat in just three days.
Well, he didn't build the whole boat in three days, obviously. The time-consuming process of laying out and cutting the plywood had already been done by kit makers Fyne Boat Kits in their factory in Kendal, and Guy went on one of their courses. Also, the boat was not finally finished in three days either - only the primer was on. The other time-consuming process, painting and decorating, was completed at home.
But the resulting Jimmy Skiff was round the back of the Classic Boat tent and jolly nice it is. Guy is an entertaining writer as well, chronicling his voyage past fear as he embarked on a process that was clearly well outside his comfort zone.
Chapter Two appears in the August issue, but I won't be buying it. The Three-day Boat article is the only reference to rowing in the entrie June and July issues, and it is not worth plowing through acres of stuff about the J class just for the one article on a boat I might actually step aboard.
Posted by Chris Partridge at 19:24

The fine print on Fyne Boat Kits is that they are Chesapeake Light Craft, Ltd.. This year I went to the CLC Okoume Fest(and bought a Chesapeake Yawl kit - more on that later)and one of the boats available for demonstration was a Jimmy Yawl. To me this looked like a dandy little boat. For a first time builder, it is a simple build and a boat that would serve nicely for a young family, teach kids to row and sail. My comment to the CLC staff was that it was probably the most underrated boat they offer, and they agreed. There may be plans afoot to upgrade the design. Maybe if it isn't broke, don't fix it.