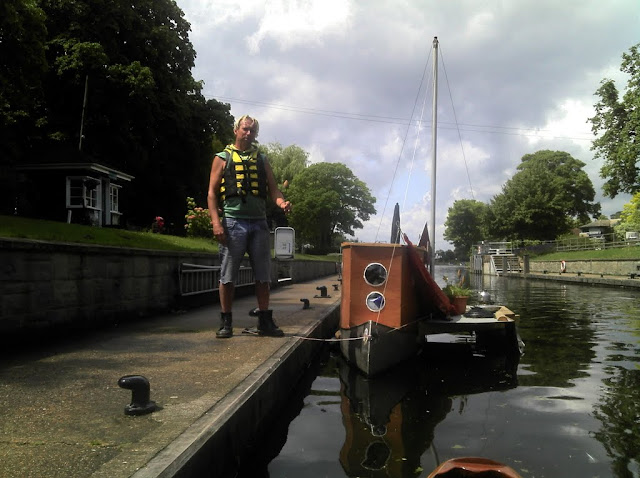 It's the people you meet that make a trip down the river specially enjoyable. We ran into Mushroom Paul at Penton Hook lock, in his amazing home-built liveaboard canoe. He has built a long tall cabin on a standard Canadian hull, complete with wood burner, and stabilised it with a platform and a float. The mast carries a jib, and it has the largest centreboard I have ever seen - a huge circular sheet of plywood pivoted between the main hull and the platform. He explained that he didn't know how big a centreboard should be so he made it as large as possible.
Paul's unusual profession in his home in the Cotswolds is carving giant mushrooms with a chainsaw, as garden ornaments. To finance his trip down the river, he was whittling small mushrooms with a Swiss Army knife. I bought a magic mushroom ("Hippy types love them!" he said). His Facebook page is here.
As we arrived at the campsite at Chertsey, a trio departed in a Canadian canoe they had bought on eBay, picking it up in Oxford and paddling all the way down to Richmond, where one of them lives. The aim was to sell it when they arrived, thus scoring a free holiday. Given the extortionate cost of living in Richmond, I wouldn't be at all surprised if they succeeded.
I was very concerned about the weight of all my gear in Snarleyow (not to mention myself hem hem) but they succeeded in cramming all three of them and a mountain of stuff in this one canoe. The only thing they couldn't fit in was a six-pack of beer, which they had to leave with us. That didn't last long... 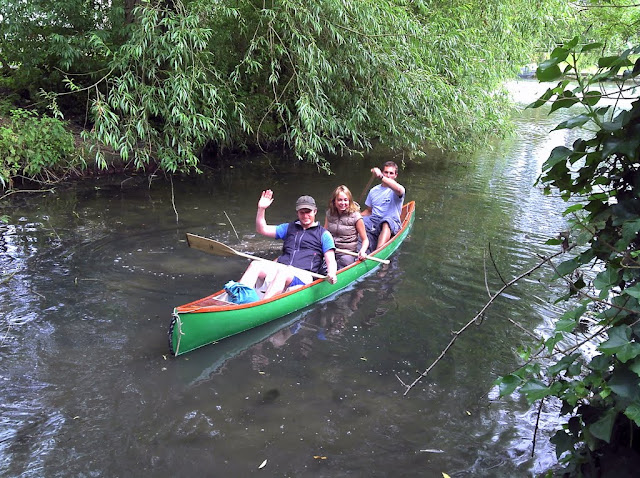 Posted by Chris Partridge at 21:15

Yes, the first thing that came to mind when I saw this dude and his canoe was a 'magic' mushroom. Ahhh, the memories.......

Mushroom Paul is my hero. Puts all of us to shame for innovation.

But those poor misguided young folks! You must NEVER leave the beer behind.

- if it wasn't for the mushrooms I'd have even more find memories!!

O Docker commented:
Oh no, not another post about a chainsaw-wielding mushroom carver who lives in a canoe!
Can't you find something different to blog about?

One of things about the bloody iPad is that if buttons are too closely spaced it is easy to hit 'delete' instead of 'publish'. Sorry.