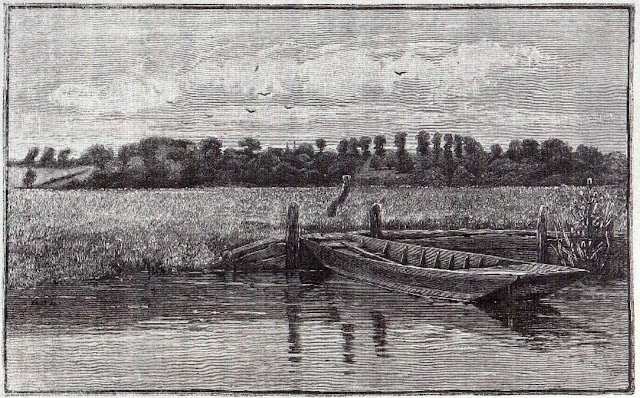 G.D. Leslie poled his punt all along the upper Thames, but was mainly based in the area from Maidenhead to Henley. Punts are rarely seen be seen below Oxford these days, and Leslie's poling style has practically vanished as a result.
In Oxford, punts are propelled by 'pricking'. The punter stands in the stern on the sloping part, lifts the pole and pushes in the right direction, correcting the course by moving the pole like a rudder between strokes. This method has the advantage that the punt can be filled with indolent passengers.
Leslie, however, 'ran' his punt in the old-fashioned way by walking forward to the middle of the boat and pushing the pole with his whole body until he reached the stern again, a much more powerful action that he claimed was less tiring than pricking because the legs provide most of the power rather than just the arms.
Leslie also advises practicing poling on both sides of the punt because it is often necessary to hug the bank to keep out of the main current, something Oxford punters don't have to worry about so much.
Leslie completely ignores the deviant practice of punting from the till (the flat area of decking) that one sees in Cambridge.
The picture shows his punt at St Patrick's Stream in Shiplake.

Real punters stand on the end of the punt :)

I was wondering how long it would take for a Cambridge man to rise to the bait, but less than 20 minutes is outstandingly fast....